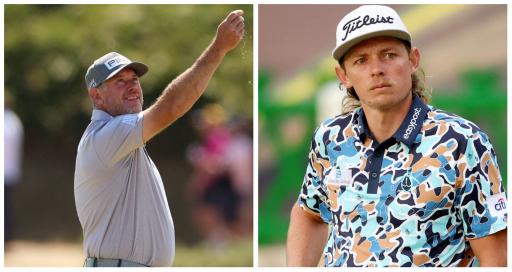 It may be nothing, it may be something. But Lee Westwood has dropped a like on a post linking Cameron Smith with LIV Golf.

Smith, 28, was involved in an awkward exchange at his winner's press conference after he rained on Rory McIlroy's parade to claim the 150th Open.

He had just won his maiden major with an extraordinary performance at the home of golf, playing the final round in 64 strokes.

The Aussie came from as many as four shots behind to pip McIlroy, Cameron Young and Viktor Hovland to lift the Claret Jug.

Smith confirmed that he planned to see just how many beers he could fit inside the iconic trophy.

On an Instagram post this morning, The Players champion confirmed that two beers fit perfectly inside the jug. "Had a good night," he said.

Still, the news this morning is that Smith will be named as the latest defector to LIV Golf.

"I just won the British Open, and you're asking about that," Smith said of the LIV question. "I think that's pretty not that good."

Disclaimer: Retweets and likes not do not equal endorsements!

You might re-call that this same account also claimed Jordan Spieth was on his way to LIV Golf.

Then after 24 hours of wild speculation, Spieth had to release a statement publicly denying he was leaving the PGA Tour.

"Perhaps I had not been vocal enough," Spieth wrote.

It's an interesting development, no doubt. Word is Smith could be joined in an "all-Australian" LIV Golf team.