Tommy Fleetwood's wife and manager Clare has reportedly informed The Times the Englishman will not be joining LIV Golf. 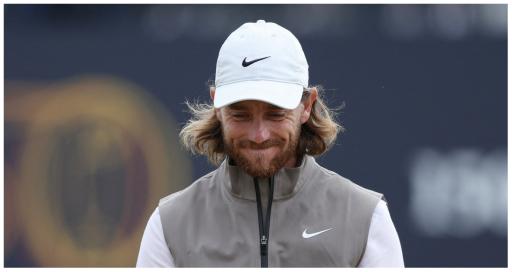 Tommy Fleetwood has turned down the chance to sign up for the Saudi-backed LIV Golf Invitational series, according to a report by The Times.

The newspaper report by Rick Broadbent claims that Fleetwood, 31, will reject an offer on the table by the upstart spearheaded by Greg Norman.

There is absolutely frenzied speculation at the moment with the PGA Tour braced for more defections to the controversial circuit.

Before the 150th Open Championship at St Andrews, PGA Tour commissioner Jay Monahan outlined significant changes to the schedule, along with increased prize purses in an attempt to fend off the threat of LIV.

Monahan conceded that the PGA Tour could not "compete in dollar bills" against the league, which is bankrolled by Saudi Arabia's Public Investment Fund.

However, it seems like there are more players who are on the verge of turning their backs on the PGA Tour.

Fleetwood has long been rumoured to be have been approached and alleged to have been mulling an offer.

His wife and manager Clare was at the series' inaugural event at Centurion Club in Hertfordshire.

The report claims that Clare has confirmed Fleetwood WILL NOT be joining LIV.

Some of the assumed interest in Fleetwood's flirtations with LIV come from his caddie and friend Ian Finnis.

The looper's social media activity can be described as interesting as he criticised the DP World Tour chief executive Keith Pelley as recently as two weeks ago.

Finnis wrote that some DP World Tour members harbour a feeling of "resentment" to Pelley.

Elsewhere, Henrik Stenson, the Ryder Cup Europe captain, is reportedly on the verge of a shock move to LIV Golf.

Such a move would cause considerable embarrassment for Ryder Cup Europe HQ.

It was previously reported that Stenson, 46, was given an ultimatum: LIV Golf or lead Team Europe.

If Stenson were to join LIV, then he would be immediately stripped of the captaincy according to Sky Sports' Jamie Weir.

It would bring Thomas Bjorn back into the picture for a possible second stint at the helm.

Luke Donald also previously expressed an interest in taking charge. He was shortlisted on a list of previous candidates.

The other PGA Tour players who are currently being linked with a move to LIV are Bubba Watson, Hideki Matsuyama, Marc Leishman, Tony Finau and now one-time major winner Cameron Smith.

This is an absolute circus, isn't it? If Stenson were to join, then Ryder Cup Europe could potentially lose a whole generation of Ryder Cup captains to LIV Golf in Sergio Garcia, Lee Westwood, Ian Poulter and Graeme McDowell.

I'll be perfectly honest, I do not believe that LIV Golf would move for Stenson were he not the current skipper.

Have they offered the Swede a deal that is essentially take it or leave it?

I believe that this is just a move by LIV to cause disruption. A power play.