Here's where the LIV Golf players finished at the 150th Open Championship and how much money they all won. 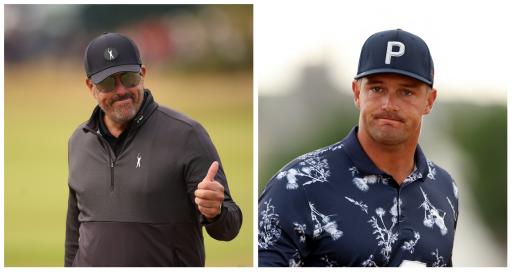 In total, there were 19 LIV Golf players who participated in the 150th Open Championship at St Andrews.

The R&A must have been nervous after several of the rebel players forced themselves into contention at various points during the landmark major.

It's fair to say that Rory McIlroy was the favourite. But not even a crowd of more than 50,000 supporters could get the Northern Irishman over the line.

The highest-profile LIV Golf player to peg it up at the Old Course was Phil Mickelson. Lefty ended up missing the cut.

It was likely his last ever Open at St Andrews and his (perhaps) final walk up the 18th over the Swilcan Bridge was a lot different to Tiger's.

The 52-year-old did not stop as he walked over the iconic bridge and the grandstands were essentially empty, providing barely ripple of applause.

Mickelson grew frustrated with LIV Golf questions last week, urging one reporter to "let it go" when asked why he didn't attend the champions' dinner.

"I couldn't be happier," Lefty said. Mickelson later declined to do any more media interviews.

Ian Poulter, too, was also frustrated over questions about being on the receiving end of booing. "I thought I had a great reception," he said.

Still, apart from a few stories, the topic of LIV Golf did not dominate the chatter as we celebrated golf's oldest major.

Although it looks winner Cameron Smith could soon be joining the Saudi-backed series judging by this awkward exchange.

Scroll down to see which LIV Golf players participated in the 150th Open Championship, where they finished and how much they won.

These were the LIV Golf players who participated in The Open:

Here's how much the LIV Golf players earned: