Tiger Woods has officially dropped outside the top 1000 players in the Official World Golf Ranking after the 150th Open Championship at St Andrews. 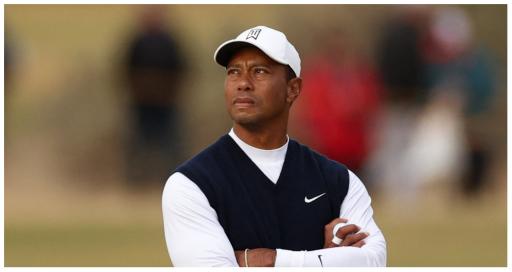 Tiger Woods has officially dropped outside the top 1000 players in the Official World Golf Ranking after the 150th Open Championship.

Woods was reduced to tears at the Swilcan Bridge as he likely bid farewell to St Andrews Opens at the age of 46 when he missed the cut last week.

As he was walking up the iconic 18th fairway at the Old Course, it was Rory McIlroy's acknowledgement that set him off.

Speaking immediately afterwards, Woods admitted he hoped that this was not the last time we will see him at an Open.

Earlier last week he laughed off suggestions that he was planning on hanging it up. "Who me? Retire?! No, no, no, no, no," he said.

But after slumping to 9-over over 36 holes at the home of golf, missing the cut by nine, he has now dropped outside the OWGR top-1000.

The 15-time major champion is now ranked 1009th in the world. He was ranked 994th heading into St Andrews.

What next for Tiger Woods?

Woods is likely to take a lengthy spell away from competitive golf.

It is likely that the next time he plays will either be the father/son jaunt - the PNC Championship - with his son Charlie Woods or the Hero World Challenge in Albany, Bahamas, of which he is the tournament host.

It wouldn't be unreasonable to suggest the next competitive tournament he plays in is the 2023 Masters.

After The Open, he said of his future: "I have nothing, nothing planned. Zero. Maybe something next year. I don't know. But nothing in the near future. This is it. I was just hoping to play this one event this year.

"And I was lucky enough, again, got three events in. And they're all majors. So I feel very fortunate to have had the things happen this way and the struggles I've been through to get to this point."

What did Woods say about retirement at St. Andrews?

Woods said: "I'm not retiring from the game. But I don't know if I will be physically able to play back here again when it comes back around. I'll be able to play future British Opens, yes, but eight years' time, I doubt if I'll be competitive at this level.

"It's a struggle just playing just the three events I played this year. That in itself was something I'm very proud of. I was able to play these three events, considering what has transpired.

"Hopefully we do more hard work and give myself some more chances next year to play a few more events."

Next page: Rory's tears after more major heartbreak at The Open