It's not just Open champion Cameron Smith that has been heavily linked with a move to LIV Golf this week. 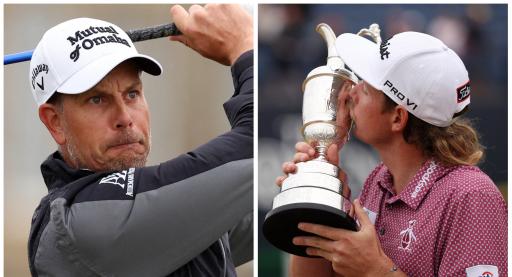 Open champion Cameron Smith is not the only big name heavily linked with a move away from the PGA Tour to LIV Golf this week.

Smith etched his name on the famous Claret Jug for the first time in his career at St Andrews on Sunday as the Australian now moves to a career-best second in the Official World Golf Rankings.

But despite his latest success, all the talk off the back of his maiden major win has been about a potential move to the Saudi-funded LIV Golf Invitational Series.

Former Open champion Ian Baker-Smith has also confirmed his fellow Australian is definitely in talks with LIV Golf and that his value is at least $100 million or more now.

It is understood that Tuesday will be the day when LIV Golf announces some new signings ahead of its next event in Bedminster at the end of the month.

The latter would be a huge move for LIV Golf if they could effectively take a Ryder Cup captain off the table.

Should Stenson move to LIV Golf then he would lose his Ryder Cup captaincy.

There is absolutely no chance LIV Golf want Henrik Stenson as “the player”. They want him as “the European Ryder Cup captain”. It’s a power move.

Henrik Stenson is expected to be stripped of his Ryder Cup captaincy and join the Saudi-backed LIV Golf Invitational Series.pic.twitter.com/rQjXdVV0lc

Leishman and Watson have hardly been setting the world alight with their form of late so making easy money on LIV Golf would likely offer plenty of appeal for both players, but we will have to see what happens there.

Matsuyama has had something of an up and down 2022 so far on the PGA Tour with a win at the Sony Open in January but only three top-10 finishes since.

Norman clearly wants to take LIV Golf tournaments over to Japan as much as possible so to have Matsuyama on his roster would certainly be huge to help bring these events to the masses.

LIV Golf's bid for Matsuyama is likely going to be a substantial one given he is the No.1 sportsman in Japan.

Will Matsuyama stick or twist? We'll just have to wait and see if they hit Hideki's number.

There has also been plenty of talk about reigning PGA Tour FedEx Cup champion Patrick Cantlay possibly making a move to LIV Golf.

This one would be a huge surprise to us here at GolfMagic, but there have been hundreds of tweets in recent weeks linking his name with a move to the Saudi golf league.

There is also still a question mark over the future of Rickie Fowler.

The popular American is still badly out of form so who knows whether he will jump ship at some stage this season.

England's Tommy Fleetwood had been strongly linked with a move to LIV Golf by a number of publications off the back of his fine tie for fourth at The Open, but his wife has since told The Times that he will not be going.

Related: Henrik Stenson moves ever closer to a move to LIV Golf and being axed as Ryder Cup captain

"Tuesday may be the day for a wave of tour defectors," tweeted Johnstone.

"Going to be some astounding names jumping ship with a VERY recent winner being touted as in the group. I hope he thinks long and hard about the ramifications of the move to the (L)egacy (I)s (V)oided crew."

Tuesday may be the day for a wave of tour defectors. Going to be some astounding names jumping ship with a VERY recent winner being touted as in the group. I hope he thinks long and hard about the ramifications of the move to the (L)egacy (I)s (V)oided crew.

Is the "VERY recent winner" a certain Open champion in Smith? Who knows, we will just have to wait and see.

Next Page: Sergio Garcia to RESIGN from the DP World Tour after not feeling enough love