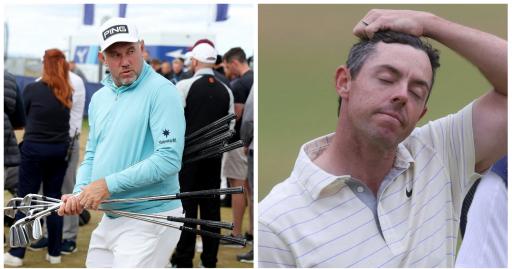 LIV Golf players Lee Westwood and Laurie Canter have reacted to the changes announced by the governing body that awards world ranking points.

Unsurprisingly Westwood, in particular, falls on one side of the argument. The Official World Golf ranking says the changes are to "remove bias".

Golf stat man @VC606 on Twitter used one specific example, then wondered what the "hardworking" DP World Tour pros made of it all.

Under the changes, the winner of the ISPS Handa World Invitational in Northern Ireland this week will receive just eight world ranking points.

On the other hand, the winner of the FedEx St. Jude Championship on the PGA Tour will receive 68.5 points.

Of course, there is a considerable difference between the strengths of each field. Over on the PGA Tour, it is the first playoff event of the postseason with an absolutely stacked field and a prize purse of $15million, with the winner taking home a cheque for $2.7million.

By contrast, the ISPS Handa World Invitational has a prize purse of $3million, with the winner walking away with $250,000.

Westwood posted: "Literally makes all the tours around the world feeder tours Ovies. How they could vote for this and get it passed I have no idea."

Six-time European Tour winner Tony Johnstone, who has previously lashed out at the LIV Golf players, wrote: "Good luck to DPWT players trying to get into the top-50 if they support their home tour."

Scroll down to see the reaction

Oh dear! I was expecting something like this, but seeing it is quite shocking. 68 v 8! What are the hard working Euro/DPWT players thinking of this... pic.twitter.com/H5NBhfe8ez

How many on Liv? https://t.co/GOOq6yPXaS

Its an absolute piss take and the DPWORLD Board Members who backed this load of shit know it as well..... Its just one piss take after another Tony.... Just line us up and feed us shit like mushrooms..... Ridiculous stuff, well done guys

This is the worst week to pretend to show comparisons though?
I won this year on the LET and got 5 world ranking points for it. The winner of the Womens Scottish Open 2 weeks ago got 62 points. I don’t think either system is right as it is but strength of field is a real thing. https://t.co/QT4WZ7Nrk9

Unless you win a few Rolex events there is no chance. At least 10 guys will get PGA tour cards every year to try and make a few points over there. Going to be interesting to see what effect this will have over the next 12months.Smaller tours like ST and Aus going to get no points

Well, whether or not the new system is fair has clearly got tongues wagging!