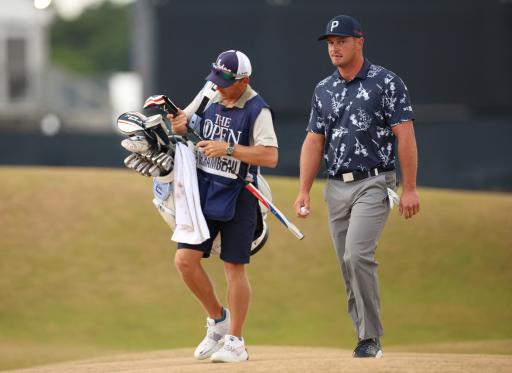 DeChambeau, 28, confirmed the announcement in July 2021 after he parted ways with his long-time caddie Tim Tucker.

Tucker looped for DeChambeau for all eight of his PGA Tour wins and his maiden major, the 2020 U.S. Open at Winged Foot.

In an interview with Golf, DeChambeau explained there wasn't a falling out with Tucker. Apparently, they even discussed splitting in 2020.

He told the publication: "Everybody always thinks there was some kind of falling out, but there really wasn't. This was in the works for a while.

DeChambeau now plays on the LIV Golf Invitational Series circuit and at the time of writing his PGA Tour future is unknown.

He was named as a plaintiff in an antitrust lawsuit against the PGA Tour, arguing against his suspension from the established American tour.

DeChambeau claimed it would be "an honour" to still play on the PGA Tour but critics suggest this should not be allowed.

Ziegler, 34, previously worked as an instructor at Dallas National Golf Club, which is DeChambeau's home course.

It is also the home of his coach, Chris Como. Como has previously given an interesting take on his student.

Ziegler's first tournament on the bag was the 2021 Open at Royal St. George's in Sandwich, England. He missed the cut.

Since then, DeChambeau has struggled with injuries. He had two main injury problems to deal with.

He hurt his hip when training for long drive and also hurt his wrist. He exacerbated both of these injuries when he slipped over playing ping pong.

Ziegler is also known for his vibrant and colourful socks. He got tongues wagging at the WGC Match Play in the 2022 season.

Next page: Will Zalatoris opens up on decision to sack caddie