LIV Golf: 5 things I have learned on-site at the LIV Golf Invitational Series

The week at the LIV Golf Invitational Series at Centurion Golf Club has been an extremely exciting, controversial and arguably the most important week in professional golf history. 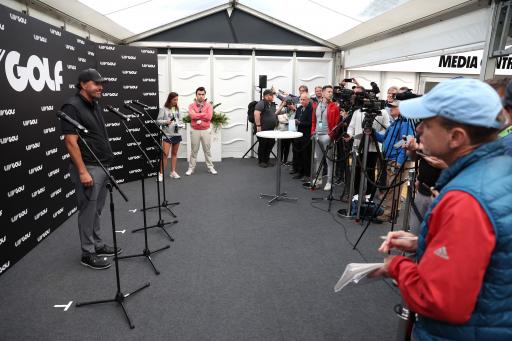 Two of the mottos for the LIV Golf Invitational Series are "Don't Blink" and "Golf, But Louder." Well, a lot of noise has been created and there have been many unmissable moments.

In what could be the most significant week in the history of professional golf, the PGA Tour has suspended players who have defected to the LIV Golf Series and removed them from the FedEx Cup standings.

The players discovered this news as soon as they walked off the course on Thursday at Centurion Golf Club in St. Albans. Lee Westwood and Ian Poulter were visibly shocked by their suspensions.

Each of the 17 players who PGA Tour commissioner Jay Monahan named learned that they also can't play as non-members through sponsorship exemptions.

Here is what I have learned throughout the week at the inaugural event of the LIV Golf Invitational Series commissioned by Greg Norman and bankrolled by the Public Investment Fund.

Related: LIV Golf: Why Greg Norman had "hate in his eyes" in this photograph

Phil Mickelson and his art of deflection...

In his press conference on Wednesday morning, Phil Mickelson was asked questions about his PGA Tour membership, the human rights record of Saudi Arabia and his negotiations with LIV Golf.

The 51-year-old danced around each question and used stock answers for the majority of the session which lasted just under 30 minutes. He was almost like a politician in the way he refused to comment on controversial topics.

Robots are taking over...

The Public Investment Fund of Saudi Arabia has pumped £1.6 billion into the LIV Golf Series and it seems a small but significant chunk of this has been dedicated to robotic drinks carriers in the media centre.

As you can see in the footage below, a mobile robot circulated the press room at Centurion throughout the week to deliver drinks and tournament information to the media, something which has never been seen before.

There is a LIV Golf robot driving around the media tent and offering up drinks as reporters work to file stories. I share this tweet for informational purposes only, not to #GrowTheGame pic.twitter.com/WBL9JXaEPq

Many of you may be wondering what LIV Golf means and why it has this name. It is because LIV is the roman numeral for 54 which is the number of holes being played at each event of the breakaway series.

48 players will play over three rounds in each of the eight events which conclude with the season-ending team championship event at Doral in Miami.

The first event of the LIV Golf Invitational Series has been advertised and promoted as being in London when in fact, it isn't at all.

As I sit here at Centurion now, I am 21 miles from the London Eye to add further context. St. Albans (or Hemel Hempstead) is our host location this week and not the capital.

LIV Golf is here for good and they've only just started...

The LIV Golf Invitational Series of 2022 may only be eight events for now, but the PGA Tour's hardline stance shows that the event at Centurion is just the start of something monumental.

With Bryson DeChambeau and Patrick Reed signing up for the second event in Portland with Rickie Fowler and Bubba Watson rumoured to follow, PGA Tour dominoes are falling and the LIV Golf pyramid is stacking up.

With the Public Investment of Saudi Arabia reportedly holding assets of $600 billion, there really is no limit to its potential in attracting the world's best players by the end of its inaugural season.