LIV Golf League Schedule 2023: Eight of 14 tournaments will be staged in USA but Saudi Arabia to host final. 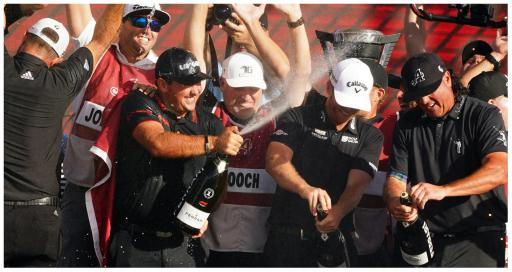 LIV Golf has officially confirmed its full 14-tournament schedule for 2023 and the news that Saudi Arabia will host its season finale at Royal Greens Golf & Country Club in Jeddah from November 3 to 5.

Despite claiming they want to make it a global Tour, the LIV Golf League will see eight of its 14 tournaments staged in the United States.

The season will tee off in Mexico from February 24 to 26.

News emerged last week that LIV Golf has reached a multi-year agreement with The CW Network as their TV broadcast partner.

LIV Golf CEO Greg Norman recently confirmed the Saudi-bankrolled league will comprise of 60 players in each tournament in 2023, with each of the 12 teams allowed one substitute player.

In 2022, the inaugural LIV Golf season featured eight tournaments, five of which were staged in USA.

The season finale took place at Trump National Doral in Miami, but this time the last event will be in Jeddah.

Trump National Doral will return, but it will host the penultimate tournament of the season from October 20 to 22.

Of other notable locations on LIV Golf in 2023, England is once again on the map at Centurion Club in Hertfordshire from July 7 to 9.

That is two weeks before The Open at Royal Liverpool, which will likely see LIV Golf players once again clash with the world's best on the PGA Tour.

One surprise omission from the rota is Boston, which was understood to have been one of the most attended LIV Golf tournaments in 2022.

Here's a look at the full list of events:

Johnson memorably resigned his PGA Tour membership after signing a multi-year deal with the tour, commissioned by Greg Norman.

DJ was the biggest earner for LIV Golf on the course in 2022 in what can only be described as a landmark year in the game.

It is understood Johnson received a pay packet of $150 million to join LIV Golf last summer.

Smith won in Chicago and Koepka won in Jeddah.

The PGA Tour recently announced huge changes in response to LIV Golf, increasing their own prize purses with a series of elevated events.

They also strengthened their ties with the European-based DP World Tour.

Tiger Woods and Rory McIlroy have spearheaded the response, and they today confirmed the signing of two more major champions to their new Monday Night Golf League called TGL.

More venues for the LIV Golf League 2023 will be announced soon, so keep checking GolfMagic for more news and updates.