Sergio Garcia has joined Cameron Smith in leaping to the defence of LIV Golf's Greg Norman after Tiger Woods and Rory McIlroy called on him to quit. 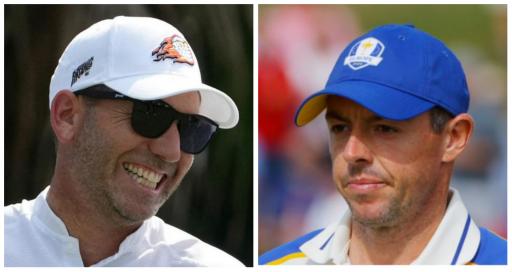 Sergio Garcia has leapt to the defence of Greg Norman after Tiger Woods and Rory McIlroy called for the Australian to quit as the LIV Golf chief executive as he accused some former Ryder Cup teammates of behaving with "little class".

Garcia has been in the news a lot over 2022. He was one of the first players to signal his intentions to join the Saudi-financed tour when he was filmed  angrily ranting towards a PGA Tour rules official during the Wells Fargo Championship.

In fairness to Garcia, he was absolutely hosed by that ruling...

The Spaniard said he "couldn't wait to leave this tour" and since then he has been involved in a number of frosty exchanges.

There was his alleged outburst at the BMW International Open in Germany when he was fined £100,000 and suspended by the DP World Tour.

He threatened to resign hi DP World Tour membership after playing the 150th Open Championship in July after claiming he did not feel loved any more, despite "giving half my life to the European Tour".

Suffice to say, it's all been more than a little bit unpleasant. Tensions rose once again when he withdraw from the BMW PGA Championship - the tour's flagship event - citing no reason after the first round.

Speaking exclusively to GolfMagic this week, golf icon Jose Maria Olazabal even suggested the 2017 Masters champion should have "handled things a little better".

It's clear now Garcia has no issue in speaking his mind. He has responded to Woods and McIroy's suggestions that there could be a path forward providing Norman quits as the LIV Golf chief executive and the litigation from both sides is stayed.

Leaping to the defence of Norman - just like Cameron Smith - Garcia told Marca:

"They say that Greg Norman has to go. And does [PGA Tour commissioner] Monahan have to go? It's very easy [to say] those on the other side have to go. There also people [on both sides] who have done things wrong. Greg Norman is our CEO and we support him.
"We all wish we could come to an agreement. There are people who could have done wrong in both places.
"But it seems that there are only bad guys on one side."

Garcia also had some interesting comments regarding the Ryder Cup. He cannot automatically qualify because he didn't play in enough tournaments in 2022.

That being said told the publication he still wants to go and "be the Sergio who loves it and who puts an arm on everyone's shoulder".

But he doesn't know if he wants to be part of a team that doesn't want him there.

"I don't know if I want to be part of the team. Because if there are three or four [players] that, If I'm there they'll be looking at me badly and they don't want me there [then] what do I contribute to the team?
"I really want to be there to be me, to be the Sergio who plays the Ryder Cup, who loves it and who puts an arm on everyone's shoulder to help.
"And then if you have people there who, because you have decided to go on another tour, are no longer their friend, [and] you are the bad guy, you are such and such, that has disappointed me and has taught me that those people who I thought were really friends of mine are not.
"Jon [Rahm] is not one of them, but there are others who have shown very little class."

Garcia's comments come as three venues were confirmed for the 2023 LIV Golf League.

One of them is Valderrama, a course Garcia has fond memories of having won as many as three times there over his career.

What did Tiger Woods say about Greg Norman?

What did Rory McIlroy say about Greg Norman?

What do you make of Sergio Garcia's comments? Do you think Greg Norman should quit? Do you care?

Let us know in our social media channels.

Next page: Tiger and Rory host another emergency LIV meeting