Phil Mickelson once again declined to discuss his ban from the PGA Tour after his first-round 69 at the LIV Golf Invitational Series at Centurion Golf Club. 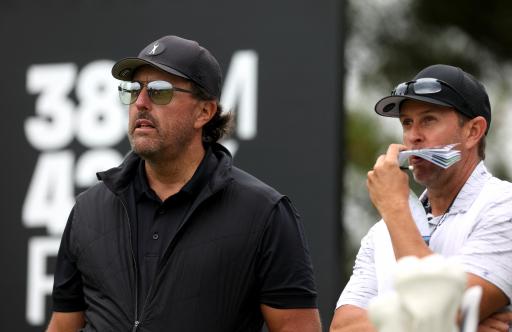 Phil Mickelson refused to discuss his ban from the PGA Tour after posting a solid score of 1-under-par in the first round of the LIV Golf Invitational near London.

Mickelson maintained his tactic of question evasion when facing the press on Thursday evening. The 51-year-old was named on a list of players who have been removed from the FedEx Cup rankings by PGA Tour commissioner Jay Monahan.

"It's been a while since I played, it seemed awfully fun. The people here are terrific and it was fun to hit some good shots and get into a competitive frame of mind again. I really enjoyed it," Mickelson said.

"I drove the ball straight, that was different and nice - Anything regarding PGA Tour matters, I'm not ready to publicly discuss at this time.

"I really had a good time. I really enjoyed the day and I really enjoyed playing with DJ, Scott (Vincent) was terrific and he played really well. But, just getting back out on the golf course, competing and hitting good shots and playing well was a lot of fun."

Mickelson teed off with Dustin Johnson and Vincent on the 1st hole in the shotgun start. Lefty received huge applause as he walked on to the first tee.

Playing for the Hy Flyers team, Mickelson made six pars in seven holes to begin with and was made to wait until the 8th hole for his first birdie of the week.

He found trouble on the par-4 9th hole where he made a damaging double-bogey. He was back to 2-over-par on what looked to be a tough scoring day in St. Albans.

The still-popular American started his second nine holes faster, making three birdies between holes 10 to 15. He finished on 1-under for the day.

Playing partner Johnson, who joined Mickelson on the list of players to be suspended from the PGA Tour earlier on Thursday, also carded a 69, including five birdies and a double-bogey on the 7th hole.

The American pair are four shots behind fellow Masters champion and LIV Golf rebel Charl Schwartzel who carded a great score of 65.

All in all, only 10 of the 48 players finished under par in the first round. Ian Poulter, Lee Westwood and Sergio Garcia shot respective scores of 5-over, 5-over and 1-over.