LIV Golf Tour: Does Branden Grace have a pang of regret? Yes...

Branden Grace, who has played events on the LIV Golf Tour, admitted there was a pang of regret over missing out on the 2022 Presidents Cup. 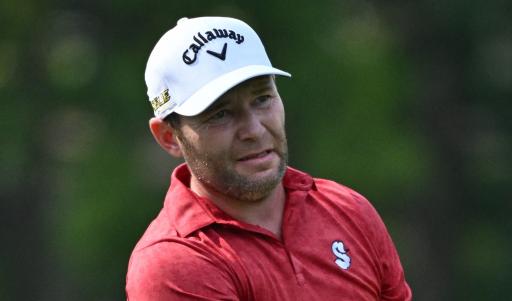 Branden Grace, who has played events in the LIV Golf Invitational Series, has admitted there was "a pang" of regret at not being able to participate in the 2022 Presidents Cup as he claimed "things have got out of hand".

Speaking to Sky Sports' Jamie Weir ahead of the Dunhill Links Championship on the DP World Tour, the 34-year-old South African opened up on what it was like watching the 22 Cup and how he believes a compromise can be thrashed out between the warring tours.

Grace, who is part of the all-South African side called Stinger GC comprising of Louis Oosthuizen, Charl Schwartzel and Hennie du Plessis, is the second highest on-course earner in LIV Golf's inaugural season.

Related: How much LIV players have earned in 2022

Players who weren't eligible for selection for the International side because they have joined Greg Norman's league included the aforementioned Oosthuizen, the No. 2 player in the world Cameron Smith, Joaquin Niemann, Abraham Ancer and Marc Leishman.

Does Grace have a pang of regret?

"Yeah, 100 per cent," he told Weir. "You know, the three [Cups] that I played was unbelievable. You get a bond with guys that you don't get playing any Tour event.

"It was great, I loved the whole team aspect. That's why I really like the LIV league as well, because I like being part of a team, I think it brings the best out of me.

"Because you know, out there, these guys have got your back so you've got their back. A lot of the times when I look at the leader board out on LIV I almost don't even look for myself I wanna see what I can do to try and help the team.

He added: "But yeah, to get back to the Presidents Cup - yeah, I was gutted for them [the International side]. They had a great golf team that played well. They really pushed them on Saturday, I thought that was big. I think they had them a little bit nervous on Sunday.

Grace said that he wasn't close to getting into the 2022 team. "The guys that would have been in the team [that went to LIV] I think they would have given them a little bit of a run for their money."

Asked by Weir if there could be a resolution "thrashed out", Grace said he didn't believe why players should be limited to playing just one Tour.

He said he has been playing on the European Tour since 2009.

"They never had an issue with us playing on the PGA Tour back then, so [why] is this different?"

Grace concluded: "I hope some time in the future things can maybe calm down. I think things have got out of hand a little bit too much which is a pity."

He also explained there is definitely a pang of regret that he, and others, may never experience a Presidents Cup again and how things have “gotten out of hand” but he hopes for some compromise (2/2) pic.twitter.com/JDU1LMtMZV

Grace's comments come as the PGA Tour have countersued LIV Golf, alleging the Saudi-backed series are guilty of player contracts.

You can read about that here.

Elsewhere, Rory McIlroy conceded that he is open to "peace talks" with LIV Golf, but is concerned that the controversial series is still playing by their own rules.

The Northern Irishman said he was not in favour of banning LIV players from majors, nor does he have a problem with the series being awarded Official World Golf Ranking accreditation, providing they meet the criteria.

"If we can send rockets to the moon and bring them back again and have them land on their own I'm sure we can figure out how to make professional golf cohesive again," McIlroy said.