PGA Tour pro twists knife on Kevin Na, then apologises for being a bully

Grayson Murray revisited his beef with Kevin Na in the wake of the American's decision to resign from the PGA Tour. 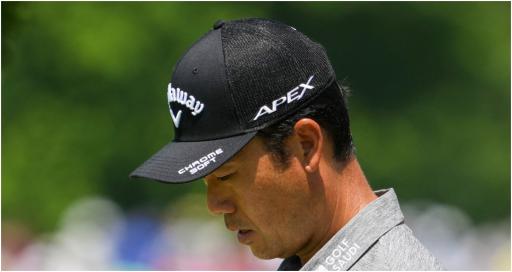 Controversial golf pro Grayson Murray appeared to take one final dig at Kevin Na before he departs to the LIV Golf league.

Na, 37, stunned the golf world last week with the announcement that he was resigning his PGA Tour membership after 19 years.

After more than 450 starts and six wins, Na wants to play in the Saudi-backed fledgling circuit and avoid likely headache with the inevitable court battle.

Murray's beef with Na goes all the way back to January. As ever, it happened on social media. And the two ripped into each other.

Na has been known as the man who walks in his putts but his pace of play - at times - can be rather deliberate.

Golf reporter Chantel McCabe wrote watching Na "walk in putts never gets old", to which Murray replied: "Taking three minutes to putt them. Does get old"

Of course, Na had to send a bit of venom his way and responded: "You missing the cut is getting old!"

It was all rather petty, silly and downright hilarious. Even more so given the two reportedly almost came to blows on the range at the Mexico Open at Vidanta earlier this season.

Murray previously told the media: "I was hitting balls on the range, and just kind of had my head down walking to the chipping green.

"Sure enough, I hear someone yelling and cussing at me."

"I won't repeat every word he said, but basically there was a lot of profanity involved, and calling me a not-so-nice word about how I should have said it to his face in person.

"He didn't like that I didn't tag him on the post, which I'm pretty sure I did.

"I'm pretty sure Chantel [McCabe] had already tagged him, so if I respond he's already tagged in the post, so I think it works. I'm not afraid to go at him, I'll tag him."

He added: "I went right up to his face and held my ground, and I told him, if I wasn't going to get suspended right now I'd drop his a** right there on the range.

"Because what he said was very immature and I know he wouldn't have said it to me if we were just seeing each other outside of the golf course."

In the wake of Na's decision to quit the PGA Tour, Murray decided to post about Na once more:

like i said on the range in Mexico. you won’t be missed @kevinna915! @PGATOUR our rounds just got 20 min faster! https://t.co/cnh4YQcZ5G

i don’t want to be a bully. I apologize to @kevinna915. I’d be doing the exact same thing if i were him. also, for anyone who says i suck at golf y’all are wrong .