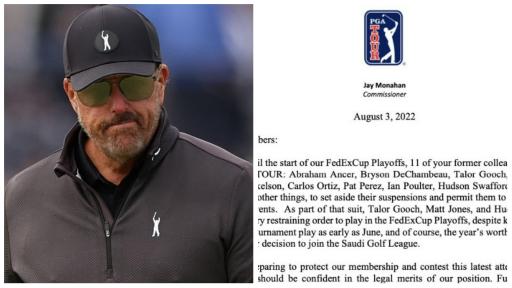 Monahan released an instant statement to PGA Tour players after it came to light this afternoon that Phil Mickelson, Bryson DeChambeau and nine other LIV Golf players had filed a lawsuit against the PGA Tour.

According to the complaint, the PGA Tour suspended Mickelson back in March well before suspensions were dished out at the first LIV Golf event in June.The PGA Tour apparently then denied his appeal. Mickelson was allegedly recruiting players from the PGA Tour to LIV Golf.

LIV Golf players Talor Gooch, Hudson Swafford and Matt Jones, three of the 11 players involved in the lawsuit, are allegedly "seeking a temporary restraining order to play in the FedEx Cup Playoffs."

The 11 LIV Golf players' decision to file a lawsuit comes a day before the PGA Tour hosts its final regular season event of the season before the FedEx Cup Playoffs, while LIV Golf enjoys a four-week break from action until its fourth LIV Golf Invitational Series event in Boston.

In his latest memo to PGA Tour members, Monahan continues to refer to LIV Golf as the "Saudi Golf League".

Related: Paige Spiranc slams LIV Golf players who have filed a lawsuit against the PGA Tour

"Fundamentally, these suspended players - who are now Saudi Golf League employees - have walked away from the TOUR and now want back in," writes Monahan.

"With the Saudi Golf League on hiatus, they're trying to use lawyers to force their way into competition alongside our members in good standing.

"It's an attempt to use the TOUR platform to promote themselves and to freeride on your benefits and efforts."

Memo from PGA Tour commissioner to players in response to antitrust lawsuit that was filed Wednesday in California. pic.twitter.com/T0UR9FMoud

With just days until the start of our FedEx Cup Playoffs, 11 of your further colleagues have filed suit against the PGA TOUR: Abraham Ancer, Bryson DeChambeau, Talor Gooch, Matt Jones, Jason Kokrak, Phil Mickelson, Carlos Ortiz, Pat Perez, Ian Poulter, Hudson Swafford and Peter Uihlein seeking, amongst other things, to set aside their suspensions and permit them to play alongside you in PGA TOUR events. As part of that suit, Talor Gooch, Matt Jones and Hudson Swafford are seeking a temporary restraining order to play in the FedEx Cup Playoffs, despite knowing they would be ineligible for tournament play as early as June, and of course, the year's worth of communication in advance of their decision to join the Saudi Golf League.

We have been preparing to protect our membership and contest this latest attempt to disrupt our TOUR, and you should be confident in the legal merits of our position. Fundamentally, these suspended players - who are now Saudi Golf League employees - have walked away from the TOUR and now want back in. With the Saudi Golf League on hiatus, they're trying to use lawyers to force their way into competition alongside our members in good standing.

It's an attempt to use the TOUR platform to promote themselves and to freeride on your benefits and efforts. To allow reentry into our events compromises the TOUR and the competition, to the detriment of our organization, our players, our partners and our fans. The lawsuit they have filed somehow expects us to believe the opposite, which is why we intend to make our case clearly and vigorously.

Let me be clear: we will continue to defend the members who abide by the regulations written by and for the players.

I'm sharing this with you because we've been transparent throughout this process, with ample communication about our rules and expectations. In that spirit, I encourage you to reach out to me or any member of the staff for further insight. I also encourage you to speak out publicly on this issue, if you are so inclined. This is your TOUR, built on the foundation that we work together for the good and growth of the organization... and then you reap the rewards. It seems your former colleagues have forgotten one important aspect of that equation.

What do you make of LIV Golf players filing an antitrust lawsuit against the PGA Tour, and what do you make of Jay Monahan's response? Share your thoughts and comments over on the GolfMagic social media channels.