John Daly told Piers Morgan that he deserves to be playing for more money than he currently competes for on the PGA Tour Champions. 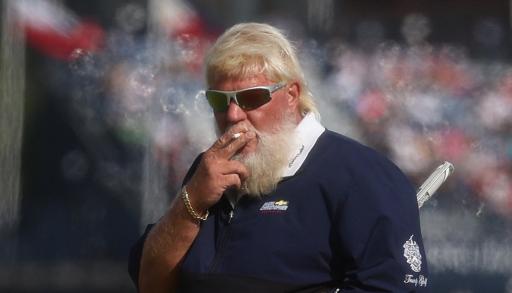 Two-time major champion John Daly revealed he begged Greg Norman to include him on the roster for the LIV Golf tour, as he believes he deserves to play for more money.

Speaking on the Piers Morgan Uncensored Show, Daly spoke of conversations he'd had with Bryson DeChambeau and Brian Harman with the former describing LIV Golf events as "the greatest thing on earth."

Daly described the Prince of Saudi Arabia, Mohammed bin Salman, as a "great guy" for his investment into the game of golf despite widespread criticism of using golf for sportswashing.

At 56 years old, Daly has won five times on the PGA Tour which include wins at The Open and the PGA Championship. He is one of the most popular figures in the game and he believes he deserves the opportunity to play for the $25 million purse that LIV Golf are offering at each event.

"I begged Greg Norman to let me be on the LIV tour," Daly told Morgan.

"I played with Brian Harman in a practice round, and with some other guys in some of the practice rounds at the British Open and it’s like, we play pro-ams, we get it. OK. That’s what is the backbone of a lot of our tournaments. But, Brian Harman says, give us a box of chocolates for the effort.

"Look, I’d rather play with amateurs than the pros sometimes but we’ve got to get compensated for that. The LIV tour is giving players that. They play pro-ams, it’s a big party, they play for a lot of money, which these guys that are on that tour, deserve that money. And I think there’s a lot of other guys that deserve that money."

Donald Trump was one of the headline names to play in the pro-am at the LIV Golf Invitational in Bedminster. The host course in New Jersey was one of many golf estates that belongs to the former American president.

Yasir al-Rumayyan was also at the third event on the LIV Golf schedule, the governor of Saudi Arabia's Public Investment Fund which is funding Greg Norman's venture.

Daly was hesitant to discuss the ethical side of golf and the alleged hypocrisy of the PGA Tour who have sponsors working in the middle-east, an accusation brough up on numerous occasions by LIV commissioner Greg Norman.

"Little eight-year-olds are building shoes for Nike. OK. We don’t want to get into that, right? You want to talk about labour laws. We’re talking about golf. Guys that are playing golf. It’s an international sport.

"The Prince of Saudi Arabia is a great guy and he’s given so much money to golfers that deserve it. Well, there are some that aren’t deserving because I should be on that tour."