Phil Mickelson has filed an entry for the first LIV Golf Invitational Series event at Centurion Golf Club in June, as well as remaining in the field for the PGA Championship. 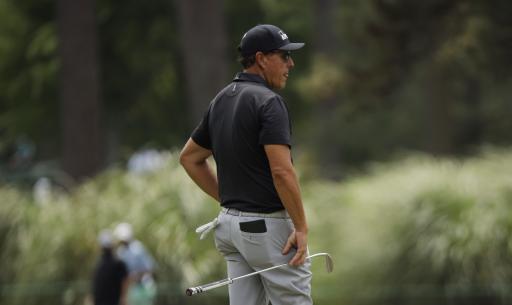 Phil Mickelson has entered the first event of the LIV Golf Invitational Series which takes place at Centurion Golf Club near London in June.

According to a statement from his agent Steve Loy, Mickelson applied to play in the inaugural event on the controversial tour within the deadline that PGA Tour players must request a release.

"Phil currently has no concrete plans on when and where he will play. Any actions taken are in no way a reflection of a final decision made, but rather to keep all options open," the statement reads.

The tournament at Centurion Golf Club will be 54 holes and has no cut, so every player is guaranteed profit. 48 players are set to tee it up in the first of eight events in the series.

Mickelson, 51, hasn't played on the PGA Tour since January and he has taken a break from the game after his controversial quotes to Alan Shipnuck about Saudi Arabia were made public in February.

There it is—Phil Mickelson has applied to play in the first LIV Golf event series in London. He’s also signed up for the PGA Championship, where he’d be the defending champion. pic.twitter.com/G2lUNdLSCt

The six-time major champion apologised for his actions in a statement, but continued to describe the people behind the LIV Golf Invitational Series as "visionaries."

He also described the Saudi regime as "scary mother******s" in a reference to the alleged atrocities that the regime commits. He also mentioned Jamal Khashoggi, a Saudi Arabian journalist who was killed.

Lefty already had a rocky relationship with the tour after accusing them of "obnoxious greed" when referring to the ownership of media rights on February 2. He attempted to justify his collusion with the Saudis in order to gain leverage and improve the PGA Tour.

Yesterday, it was revealed by a LIV Golf spokesperson that 15 players in the top 100 of the world rankings have entered the first event of the Saudi-backed series in June. Mickelson is ranked 54th in the world.

It was also announced that the season-ending team championship event, which is worth $50 million, will be held at Trump Doral in Miami at the end of October.

Next Page: Shocking fight breaks out on the golf course over the weekend