Phil Mickelson secured the first top-10 finish of his LIV Golf career at Rich Harvest Farms and it was thanks to some classic thrilling shotmaking. 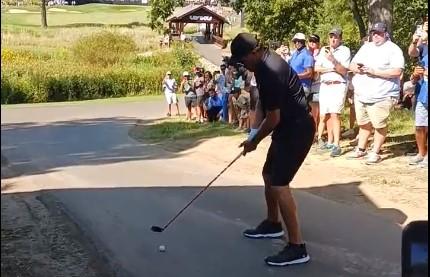 Phil Mickelson's life may have changed significantly in 2022 as he started a new chapter with LIV Golf, but the entertainment that he provides on the golf course will never change.

During the third and final round of the LIV Golf Chicago Invitational, Mickelson found himself on a cart path to the left of the par-5 18th hole at Rich Harvest Farms. A picture we've seen 100 times before in his career.

With trees obstructing his view and fans surrounding his ball in anticipation, you could find many moments from Lefty's illustrious PGA Tour tenure that mirror this exact situation.

Taking one big swipe with his wood that makes us mortals shudder, he clipped the ball off the cart path perfectly and in the footage below, you can just about see the 52-year-old's ball land on the right side of the green.

This shot led to one of nine birdies Mickelson made on Sunday. He shot rounds of 70, 74 and 66 to secure his first top-10 finish since joining the Saudi-backed series.

Before the fifth invitational of LIV Golf's schedule, the six-time major champion had failed to finish in the top 30. His best finish helped his Hy Flyers team finish third and share a four-way split of $500,000.

Mickelson has come out of his skin again in media sessions following tame appearances at Centurion in June and the US Open at Brookline. On Friday, he declared that the PGA Tour no longer holds the best players in the game.

LIV Golf commissioner Greg Norman echoed these thoughts after Cameron Smith's debut win on the new circuit, describing him and Dustin Johnson as the top two players on the planet.

"The PGA Tour for the last 20 or 30 years have had all the best players in the world. That will never be the case again. LIV Golf is here to stay, and this type of divisive talk is doing nobody good," Mickelson said last week.

"The best solution is for us to come together. I think that the world of professional golf has a need for the old, historical history of the game product that the PGA Tour provides, and I think that LIV provides a really cool, updated feel that is attracting a lot younger crowd, and that's being proven in the people that are watching and the age of the people that are watching."