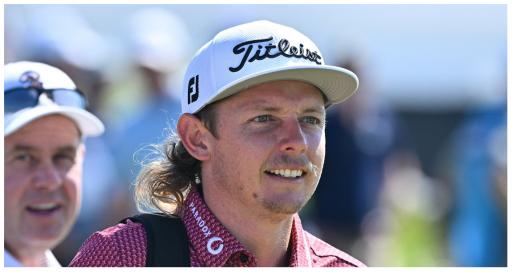 Cameron Smith claimed his maiden win on the LIV Golf Invitational Series with a three-stroke victory in Chicago, taking his on-course earnings to north of $5million in just two events since making his debut.

Playing in his second event since joining Greg Norman's league for a reported $140m fee, the Australian finished on 13-under par after 54 holes at Rich Harvest Farms.

More: How much they all won at LIV Golf Chicago

Dustin Johnson - who has already earned more on-course money in five LIV Golf events than in any other calendar year during his career - finished in T-2 on 10-under par with Peter Uihlien, who remains a plaintiff in the antitrust lawsuit against the PGA Tour.

LIV Golf Chicago went head-to-head with the PGA Tour's Fortinet Championship, where Danny Willett was on the verge of his first victory on U.S. soil since claiming the 2016 Masters.

Willett incredibly three-putted from three feet on the final green at Silverado Resort & Spa in California as Max Homa defended his title, claiming his fifth victory on the Tour.

Immediately after claiming victory, Smith said he had to prove it to himself and "probably some other people" that he was still out to win golf tournaments.

Related: DJ lands himself in hot water with Paulina at LIV press conference

Smith fired rounds of 66 and 68 on Friday and Saturday to set up a Sunday battle with Dustin Johnson, the captain of the 4 Aces GC team which has so  far dominated the team element in LIV's curtain-raising season, with three consecutive victories before heading to Chicago.

That domination continued here as once again they won the team element with a one stroke victory on 24-under par over Brooks Koepka's Smash GC side, which comprises of his brother Chase, Jason Kokrak and Uihlein.

Smith's all-Australian Punch GC side of Marc Leishman, Wade Ormsby and Matt Jones tied for third with Phil Mickelson's Hy Flyers on 17-under.

Mickelson previously joked that the "deep history" of the Hy Flyers was one of the reasons why he joined LIV for a reported $200m before LIV's opening event at Centurion Club way back in June.

The final round had some interesting storylines. Other than Smith's victory, Mickelson, who has become the de facto face of the controversial series, returned to form and finished inside the top-10.

Lefty's struggles on the golf course continued earlier in the week with rounds of 70 and 74. But a final round of 6-under 66 proved there still might be life in the old dog yet.

Related: Was Phil Mickelson right all along?!

In his LIV Golf press conference earlier in the week, Mickelson called for a truce between the PGA Tour the Saudi-backed circuit. He has also admitted that he is considering dropping out of the antitrust lawsuit.

Moments later, DeChambeau was completely wiped out by a rope on the side of the fairway.

Smith capped off his victory with a birdie at the 54th hole to sign for a finishing 69.

"I think I had to prove to probably myself and some other people that I'm still a great player. Y'know, I'm still out here to win golf tournaments," Smith told LIV's Dom Boulet.

"I'm proud of how I hung in there today. I didn't really have my best stuff I think - the first eight or nine holes. I stuck it tough and I made a few good putts coming in, it was nice."