USGA chief executive Mike Whan has spoken about future U.S. Open qualifying, the impact of the LIV Golf League and the DOJ investigation into the PGA Tour. 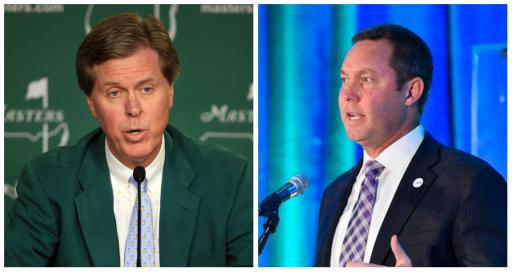 The chief executive of the USGA has given a boost to LIV Golf players as he revealed what he believes is "the real shame" about the impact of the breakaway tour.

Those included how COVID-19 led to an unexpected boom in the game, the impact of the breakaway tour and future U.S. Opens.

He was also asked about the U.S. Department of Justice's investigation into the PGA Tour over alleged anticompetitive behaviour.

Reporting from the Wall Street Journal suggested that investigation has expanded and also brought the USGA and Augusta National under the spotlight.

Whan, 49, said he was happy to let his actions "as it relates to what we do or don't do speak for themselves".

He also echoed the sentiments previously expressed by R&A chief executive Martin Slumbers on the topic of LIV.

Related Articles
"It pi**** me off!" Jim Furyk incensed by question about US Open
Padraig Harrington jokes about Steve Stricker after claiming US Senior Open

Slumbers handed LIV players a lifeline by suggesting it would go against the nature of the Open to ban players.

Whan said he couldn't imagine telling a U.S. Open champion they had earned an exemption only to tell them it "doesn't exist anymore".

Asked whether the DOJ investigation was justified, Whan told the podcast:

"I'm not sure if I have the legal background to decide what's reasonable legally but, there's definitely things we do together as a sport and thank goodness we do, whether that's First Tee, Drive Chip & Putt and girls' golf and things that we all combine together to really [take the game] to another level.
"I don't remember ever in my life having a conversation with another sports entity about how I fill my U.S. Open field or how I run a championship or my qualifiers.
"I have said from the very beginning, I am happy to let my actions as it relates to what we do or don't do speak for themselves.
"We played the U.S. Open in 2022. People that had qualified for our posted criteria played in it no matter where they were playing the week before or the week after. It was a great championship."

Whan then touched upon the billions of dollars that is being pumped into the game from the Saudi-backed LIV.

"In a strange way, and people kind of always look at the negative, but when billions of dollars has some place to spend and spend it in sport, the fact that golf is at the top of that list says a lot about where our sport is right now in terms of interest [and] not just here in the States but really around the world."

Whan said "the real shame" about the disruption in the game and the controversy over how it is funded is that we are not talking about "the greatest boom" in women, children and people of colour playing the game.

"To me the problem with golf isn't what is happening to a couple hundred folks who, no matter what they choose, are going to be pretty well off.
"The rest of the game, quite frankly, is healthier than -- not only than it has ever been -- but I think anybody could've ever predicted."

Whan then gave a boost to LIV players with regards to future U.S. Opens.

It now appears that the governing bodies of the major championships are aligning to allow LIV players' future participation.

In December Augusta National confirmed as many as LIV 16 players - including Phil Mickelson - would be welcome to play the 87th Masters.

"I can't imagine me telling somebody that they've earned something one year and two years later saying that doesn't exist anymore."