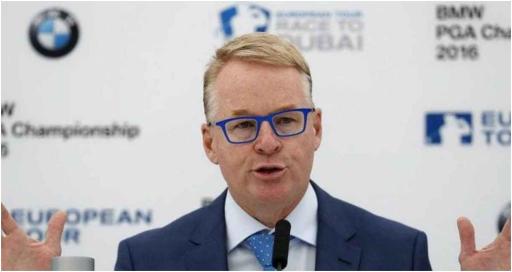 Pelley has been silent in recent weeks and months as Tour bosses at Wentworth HQ grapple with how to proceed with the Saudi-backed league and the delicate situation it has presented.

When the field was announced for the first event $25m at Centurion Club it featured high-profile players who have played on the European circuit for years.

This week the DP World Tour finally drew a line in the sand and fined players £100,000 for teeing it up just outside of London.

They have also been suspended from the Genesis Scottish Open a week before The Open, the Barbasol Championship and the Barracuda Championship.

All those events are co-sanctioned with the PGA Tour.

There were rumours swirling that Pelley was in secret talks with LIV Golf to align.

However ,both Pelley and PGA Tour commissioner Jay Monahan – who faced the media this week – remain committed to the strategic alliance that was signed 20 months ago.

Pelley told the media: “There's been a lot of speculation, a lot of rumours swirling.

“There’s been very little fact and lots of fiction. Factually, I can tell you we're partners with the PGA Tour in our strategic alliance that has been very beneficial since we signed that back in November 2020.

“There is a tremendous amount of fiction and you have to be careful with what is transpiring right now across all media platforms and I encourage everyone to again deal with the fact.

"The one fact is that we will always concentrate on doing the best for our membership, our sponsors, and our stakeholders, and for our players and our members that is prize fund and playing opportunities."

Announcing the sanctions earlier in the week, Pelley said: “Every action anyone takes in life comes with consequence and it is no different in professional sport, especially if a person chooses to break the rules.

“That is what has occurred here with several of our members. Many members I have spoken to in recent weeks expressed the viewpoint that those who have chosen this route have not only disrespected them and our Tour, but also the meritocratic ecosystem of professional golf that has been the bedrock of our game for the past half a century and which will also be the foundation upon which we build the next 50 years.

“Their actions are not fair to the majority of our membership and undermine the Tour, which is why we are taking the action we have announced today.”