Jon Rahm has given his thoughts after LIV Golf player Sergio Garcia confirmed his intentions to resign from the DP World Tour. 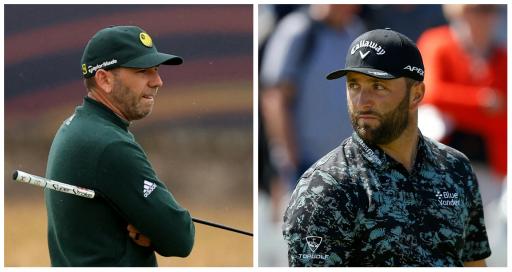 Jon Rahm has leapt to the defence of Sergio Garcia after the Spaniard confirmed his intentions to resign from the DP World Tour.

Garcia, 42, told reporters after playing the 150th Open Championship at St Andrews he "does not feel loved" and did not enjoy his week.

He intends to bring to an end his 25-year association with the European circuit and only play LIV Golf events going forward.

It remains to be seen what will happen with the majors. The R&A says it is not on their agenda to ban LIV players.

But they will look at qualifying criteria going forward. R&A chief executive Martin Slumbers described LIV as "not credible".

Paul Casey says some LIV pros are eyeing up Asian Tour events to gain ranking points as a pathway to the big ones.

"There's a lot of discussion, a lot of WhatsApp chat group feeds going around," the 44-year-old said at St Andrews.

At present, it means that he will be ineligible for 2023 Ryder Cup selection. Garcia is the record points holder in the biennial event.

He claimed that his life would not change if he was offered hundreds of millions of dollars. He has said he wants to chase legacy and history.

Rahm, 27, spoke to Spanish reporters after a disappointing Open championship where he finished T-34.

He said it was "a pity" that there are now fights between the DP World Tour, the PGA Tour and LIV Golf.

"I understand the reasons why golfers who play LIV Golf do it and it's a shame they have to relinquish their status on the PGA Tour and the DP World Tour," Rahm said.

"Sergio knows very well that he has dedicated his life to the European Tour in his 25 years as a pro.

"That they turn their backs on him that way doesn't seem right to me. And it is what it is. It is not my decision and that he has to make this decision, it hurts me.

"It's a shame also because I know that he wanted to play in Spain. And he won't be able to play either the Spanish Open or at Valderrama. And it bothers me even more that he can't play the Ryder Cup.

"The event that gives golf the most publicity around the world is the Ryder Cup.

"Because of this nonsense there are players like [Garcia] who can't play the Ryder Cup. That already makes me a little more angry. It is something that creates this sport. It is the reason that my family and I started playing golf and the reason that many in this world play golf.

"And because of what is happening, Sergio Garcia is not going to play, the best player Europe has ever had [in terms of Ryder Cup points and victories] ... it seems difficult to understand the process.

"In the end, he does what is best for him. And if the others do not cooperate, it is what is. I hope they sit down and talk."

Next page: How much they all won at The Open