Rickie Fowler has opened up on the fast-moving situation between the LIV Golf Invitational Series and the PGA Tour before a crunch meeting is held. 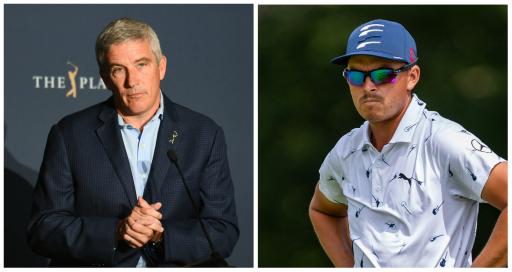 Rickie Fowler says he does not believe Jay Monahan has handled the LIV Golf situation well, arguing PGA Tour bosses have been far too reactive instead of proactive.

Fowler, 33, unlike others, has never pledged loyalty one way or another. Speaking earlier in the season, he said he was keeping his options open.

Like many before him, he has used the phrase "independent contractor". Fowler wants the answer to this question. He previously asked: "Are we, or not?"

The American, who failed to advance to the next stage of the FedEx Cup Playoffs after a nightmare Saturday last week, has opened up on golf's civil war.

Speaking to Golfweek's Adam Schupak, Fowler was still coy whether or not he will be joining the LIV Golf Invitational Series.

However, judging by his remarks, it appears that he has been a little bit frustrated with how the PGA Tour have handled the fast-moving situation.

His comments come before a crunch Players Advisory Council meeting.

Tiger Woods will be reportedly be in attendance at the meeting. According to The FirePit Collective's Alan Shipnuck: nothing is off the table.

The meeting will reportedly discuss the potential of players boycotting the majors and even the future of Monahan himself.

Fowler told the publication: "I've told the Tour and Jay when I've met with them that I don't think they have handled it very well at all.

"A lot of the stuff that has happened in the last six months to a year and is starting to happen, to me they are reacting to it versus when the talks of Premier Golf League and LIV came about is when they should have been proactive and gotten in front of it."

Fowler also reportedly confirmed that he has received a mind-boggling offer from LIV Golf, though that is hardly surprising.

Cameron Smith, who has withdrawn from the second FedEx Cup playoff event this week, is said to have signed a deal worth more than $100million according to The Telegraph.

Fowler refused to tell Golfweek how much his offer was for.

Though he did tell Schupak: "This is where I plan to be. I would say there is stuff in the works now as far as the things the Tour is trying to do to evolve with kind of modernizing and I feel like they are making the right steps now."

He added: "The Tour has been the best place to play, currently is and I'd like to see it continue to be. But you can't expect to stay the same and be the best all the time, if that makes sense."

Despite the "negative press" LIV Golf has endured, Fowler says that he is worried about the response he would receive if he were to announce his PGA Tour playing days are over.

Fowler was asked what else attracted him to LIV Golf.

"It may bring potentially new audiences in just because it's different. At the same time, it's not what golf has always been," he said.

"If there was a perfect world there would be a way to coexist because to me they are very different things."