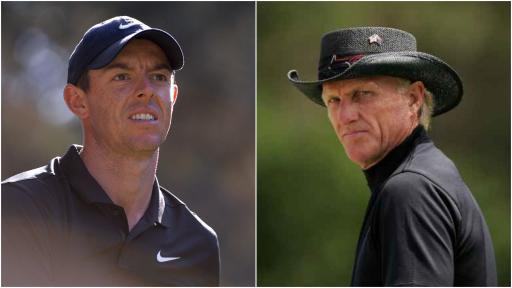 Rory McIlroy has reiterated his decision to not join a breakaway Saudi Golf League insisting the hundreds of millions coming the way of some of top PGA Tour players "isn't going to change their life."

McIlroy, who has consistently told the media he is against a Saudi-backed Golf Super League, made his latest feelings be known to Golf Digest earlier today as he prepares to tee up in his first PGA Tour event of 2022 at this week's Genesis Invitational at Riviera.

"Look, I’ve lived it—for the top guys, all that money really isn’t going to change their life," said McIlroy, who was paid $250 million when signing a 10-year sponsorship deal with Nike Golf.

"I’m in a way better financial position than I was a decade ago and my life is no different. I still use the same three, four rooms in my house. I just don’t see the value in tarnishing a reputation for extra millions."

McIlroy, on top of his millions in sponsorship deals that includes representing TaylorMade Golf, has won just shy of $60 million in career eanings on the PGA Tour which ranks him sixth in the all-time list.

The Northern Irishman has won 20 times on the PGA Tour, including four majors, two FedEx Cup and three Race to Dubais.

McIlroy, who is now married and has a daughter, is estimated to be worth in the region of $150 million.

Last week, McIlroy seriously questioned the "competitive integrity" and the motivation of the players that could join the breakaway circuit.

Bryson DeChambeau and Phil Mickelson are two of the biggest PGA Tour names that have been heavily linked with joining a Saudi Golf League, with the former rumoured to have been offered $240 million to sign up to the circuit.

LIV Golf Investments, of which Greg Norman is the CEO, have pumped $300 million into the Asian Tour, an investment that has been met with hostility and accusations of 'sportswashing' on behalf of the Saudi Arabian government.

It is believed McIlroy was offered in the region of $500 million to leave the PGA Tour and join the new golf league.

"It's the competitive integrity to me that's one of the biggest issues here, right," McIlroy told reporters last week.

"It's like, how hard are guys going to compete when they know that they are guaranteed whatever the money is.

"Even when I started to get appearance fees back in 2009 or whatever, I struggled with that, going to tournaments in Korea and Japan feeling like I had already won before I teed it up. I had to get over that mental battle of that."