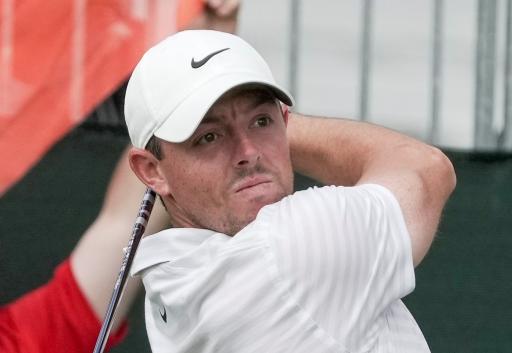 Rory McIlroy has labelled the proposed new Saudi Golf League as the "not so Super League" after seeing a number of the world's best golfers commit themselves to the PGA Tour this week.

McIlroy had already ruled himself out of the joining the Saudi Golf League long ago, but World No.1 Jon Rahm and World No.2 Collin Morikawa revealed this week that they will not be leaving the PGA Tour.

FedEx Cup champion Patrick Cantlay is very likely to remain on the PGA Tour, as too Viktor Hovland and Justin Thomas.

That's five of the world's top eight players for starters, and Tiger Woods, the man who still pushes the needle more than anyone else on the PGA Tour even when he is on the sidelines right now, has also sworn his allegiance to the PGA Tour.

RELATED: PAT PEREZ DOES NOT CARE WHAT PHIL MICKELSON HAS TO SAY

Bryson DeChambeau would appear to be very interested in the Saudi Golf League, but has he ever been one to follow the norm, and Dustin Johnson has yet to confirm either way.

Phil Mickelson and Lee Westwood, players coming to the end of their PGA Tour careers, would seem most likely to breakaway to the Saudi Golf League.

Jason Kokrak is keen too, more so that he can retire happily at the age of 44. At least he's honest.

But McIlroy, and rightly so, questions how the breakaway circuit can ever prove a success without all the world's best golfers?

"Not so Super League," said McIlroy with a smirk when quizzed by the media for this latest thoughts on the Saudi Golf League.

"I'm intrigued who would join?"

WATCH: DUSTIN JOHNSON HAS A MARE IN THE SAND AS GOLF FANS THINK HE WISHES HE WAS ELSEWHERE

Seen that eagerness in the eyes moments before putting the shot up and then that delayed look of amusement at your own one liner a thousand times…today was the day Rory *truly* became a dad pic.twitter.com/oyCsgl2pi0

The Northern Irishman has also warned a number of the younger PGA Tour players who are still considering their options, especially given signing up to the Saudi Golf League could mean being banned from the PGA Tour, DP World Tour and Ryder Cup.

"Certainly for the younger guys it just seems a massive risk. I can maybe make sense of it for the guys that are getting to the latter stages of their career," said McIlroy.

"I don't think that's what a rival golf league is really going to want, is it? They don't want some sort of league that's like a pre-Champions Tour.

"I understand the financial part of it for guys that are later on in their career. You look at the people that have already said no - [Jon] Rahm, number one in the world, Collin Morikawa, myself.

"Like you've got the top players in the world are saying no, so that has to tell you something."

NEXT PAGE: JUSTIN THOMAS HITS OUT AT PHIL MICKELSON OVER HIS CONTROVERSIAL COMMENTS