Flushing It Golf, which has called the majority of transfers in LIV Golf so far this season, is being told that Hideki Matsuyama has been offered a staggering $400 million to join the Saudi-funded circuit. 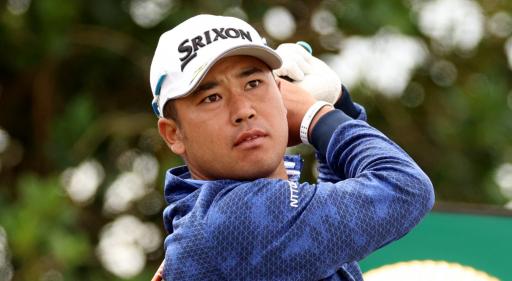 Former Masters champion Hideki Matsuyama has been offered a gigantic $400 million to join LIV Golf, according to Flushing It Golf on Twitter.

Matsuyama, 30, was forced out of the 3M Open after the first round last week when citing a wrist injury.

But the eight-time PGA Tour winner has been hotly tipped by many to become one of the next star names to join LIV Golf.

"The sources that haven't missed yet have confirmed that Hideki's deal is 400 mill!!" reads the Flushing It tweet.

"To put that into perspective, it's more than the on course career earnings of Tiger, Phil, Rory, JT and Spieth COMBINED.

"Truly mind blowing and it shows how big the market is in Asia. Thoughts?"

The sources that haven’t missed yet have confirmed that Hideki’s deal is 400 mill!! To put that into perspective, it’s more than the on course career earnings of Tiger, Phil, Rory, JT and Spieth COMBINED. Truly mind blowing and it shows how big the market is in Asia.

Should the $400 million figure be the number LIV Golf has proposed to sign Matsuyama, it would be 10x his PGA Tour career earnings.

Matsuyama currently ranks 25th in the all-time list with just over $40 million.

The World No.15, who became the first male winner of a major championship at the 2021 Masters, is Japan's No.1 sportsman.

Matsuyama is simply adored in his native homeland and that is why he comes with such a hefty price tag if LIV Golf wishes to pinch him from the PGA Tour, which hosts its ZOZO Championship in Japan in mid October.

LIV Golf CEO Greg Norman is planning a number of LIV Golf tournaments for Japan and across Asia over the coming years, so Matsuyama will likely represent one of his most prized signings should he get him.

Related: Is adidas Golf planning to buy a LIV Golf team for $1 billion?!

The apparent $400 million signing-on fee is just shy of what Rory McIlroy and Tiger Woods were apparently offered by LIV Golf for their services, but both McIlroy and Woods firmly turned down such offers earlier in the year as they committed their futures to the PGA Tour.

Open champion Cam Smith is another big PGA Tour name linked with a move to LIV Golf, and his value has seemingly increased north of $125 million since etching his name on the famous Claret Jug at St Andrews two weeks ago.

I’ll take that as another scoop.

Just to be clear, the bigger names are coming. It’s a matter of when and not if.

Who knows exactly whether Matsuyama has been offered $400 million, but one thing is certain and that is the @FlushingItGolf Twitter account has been nailing the transfers so far when it's come to LIV Golf.

Flushing It called Henrik Stenson, Jason Kokrak and "someone completely random" which sort of ended up being the case as Charles Howell III was added to the Bedminster field, set for this week.

They even called the fact that Smith, Matsuyama, Marc Leishman and Adam Scott would not be announced by LIV Golf yet, which has been the case.

It would seem like Matsuyama's team will be working closely with LIV Golf Investments at the moment to iron out the best possible deal for everyone involved.

But surely Matsuyama will go to LIV Golf?

As Flushing It Golf point out in their tweet, $400 million is even more than the combined on-course earnings of Tiger Woods, Rory McIlroy, Phil Mickelson, Justin Thomas and Jordan Spieth.

Just let that sink in for one moment.

Let's see how this one plays out...

Next Page: Another notable name is linked with a move to LIV Golf