Sir Nick Faldo believes Brooks Koepka could be worn down by the various commitments each golfer makes as part of their contracts with LIV Golf. 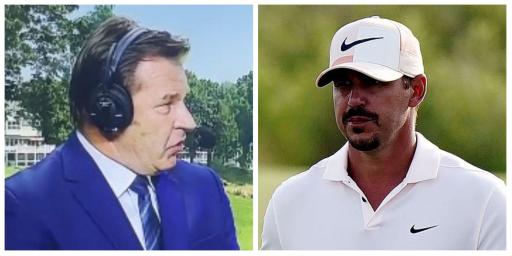 Sir Nick Faldo believes "somebody hit Brooks Koepka's number" which is why he eventually signed up to play in the LIV Golf Invitational Series.

Faldo, 64, was as surprised as many golf fans to hear of the four-time major champion's commitment to the new breakaway series commissioned by Greg Norman.

In February, Koepka told the press he was happy with the PGA Tour, adding: "They'll get their guys. Somebody will sell out and go to it."

The 32-year-old is believed to have received a fee of seven figures at the very least to become the latest big name to join LIV Golf. He will join the likes of Dustin Johnson, Phil Mickelson and Bryson DeChambeau in the second event in Portland on June 30.

"He is a wonderful example of the challenge of playing the tour. We have one thing called missing the cut, which is suddenly what they don't like, but that's part of our sport," said Faldo.

Related: Xander Schauffele leads by one going into final round at Travelers

"Brooks is a wonderful example. He started way out on the Asian Tour and he won in Europe. We were there on CBS to watch him win at Phoenix. He wins four majors, he climbed his way up.

"Last week, he's saying 'get out my face, all I want to do is play golf and go and win', but somebody then hit his number and off he goes.

"The other important thing is enjoyment. You've got to enjoy what you do in life, you can't stand on a golf course and think of another reason why I'm out here. You can't fake that."

Faldo is certainly correct about Koepka's career which started at the very bottom. He won four times on the European Challenge Tour before winning the Turkish Airlines Open in 2014.

He won twice in Japan and in 2015, he earned a Special Temporary Membership on the PGA Tour. He secured his first victory at the Waste Management Phoenix Open that year and since then, he has won two US Opens and two US PGA Championships.

Koepka came from humble beginnings in the professional game which is one of Faldo's key observations in his surprise at the American joining LIV Golf.

Next Page: Rory McIlroy hits drive 108 yards en route to yet another double at Travelers