Phil Mickelson, Bryson DeChambeau, Dustin Johnson, Kevin Na and Patrick Reed have been written to by the prominent group. 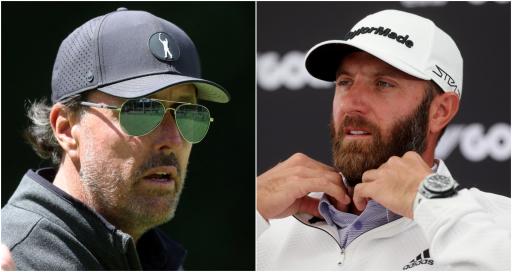 The families of the victims of the 9/11 terrorist attacks have written a joint letter to Phil Mickelson, Bryson DeChambeau, Kevin Na, Dustin Johnson and Patrick Reed urging them to reconsider their association with the Saudi-backed LIV Golf series.

The prominent group, named 9/11 Families United Group, have expressed their anger with the LIV golfers after the inaugral event of the $255m series which saw South African and former Masters champion Charles Schwartzel take home $4.75m.

Schwartzel later provoked outrage after admitting that he "never once" thought about where the money was coming from and never has in his career.

Mickelson, Johnson and DeChambeau are said to have accepted deals worth more than $100million each for their commitment to the LIV Golf series. Lefty has stated he will play all eight events this year and all 10 events next year. His deal is a reported $200m.

The group have accused Mickelson et al of betraying not only them but their countrymen, describing it as "absurd" hoping for rules exemptions to allow them to participate in future Ryder Cups.

The letter was signed by Terry Strada, who lost her husband Tom in the attacks on 11 September 2001. Strada is the national chair of the group which has more than 10,000 members.

This letter was sent to the representatives of the five Americans which also reminded them of the role Saudi Arabia played in the attacks.

More: How much they all won at first LIV Golf event

An extract read: "As you may know, Osama bin Laden and 15 of the 19 September 11 hijackers were Saudis.

"It was the Saudis who cultivated and spread the evil, hate-filled Islamist ideology that inspired the violent jihadists to carry out the deadly 9/11 attacks.

"And, most egregiously, it is the Kingdom that has spent 20 years in denial: lying about their activities, and cowardly dodging the responsibility they bear.

"Yet these are your partners, and much to our disappointment, you appear pleased to be in business with them."

Just this weekend PGA Tour commissioner Jay Monahan broke his silence on the situtation, also pointing to the fact that he knows two families who lost loved ones in the attacks.

This is what he said about the whole saga: