Paul Casey FORCED OUT of third straight major at US Open

Paul Casey joins Tiger Woods in withdrawing from the forthcoming US Open at Brookline. 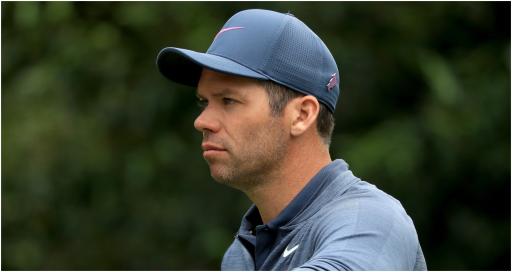 Former World No. 3 Paul Casey has been forced to withdraw from the forthcoming US Open at Brookline.

Casey, 44, has been struggling with a back issue for quite some time. He has not played competitive golf since the WGC Match Play in Texas.

At the Match Play, Casey only managed to play two holes of his opening match with Canada's Corey Conners before walking off.

He tried to come back and play the next day but felt "spasms" in his back whilst on the range in his warm-up and conceded his other two matches against Louis Oosthuizen and Alex Noren.

It means that Casey will now miss his third straight major. He previously pulled out of the Valspar Championship with the same issue.

Casey's back problems span all the way back to March at The Players championship at TPC Sawgrass.

The Englishman was in contention and even was at the receiving end of one of the unluckiest breaks in golf we have seen this season.

Down the stretch, Casey piped his drive straight down the middle of the fairway and his ball landed directly into a pitch mark.

As you might remember, The Players was dogged by the terrible weather. Perhaps the stop-start nature of the tournament exacerbated Casey's problems.

Casey was at The Masters and even played in the par-3 contest, but withdrew on the eve of the tournament. He then skipped the US PGA at Southern Hills which was won by Justin Thomas.

ESPN are reporting that Casey hopes to be fit for the landmark 150th Open at St Andrews.

Casey's last update on Instagram read: "Due to an ongoing back injury I regrettably have withdrawn from this year's PGA Championship.

"Doctors and specialists are aiding me in my recovery. This is something I've been battling a while, my last full tournament being The Players Championship back in March.

"I'm working hard to expedite the recovery process so I can be back on the course soon."

Tiger Woods has also withdrawn from the US Open. He said his body needs more time to "get stronger".