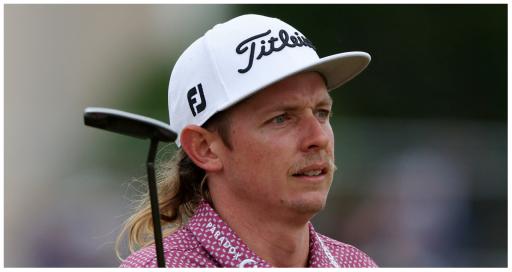 The worst kept secret in golf is finally out as World No.2 and Open champion Cameron Smith has officially joined the LIV Golf Tour.

Smith, who will make his debut at LIV Golf Boston this Friday, has accepted a signing-on fee in the region of $100 million.

In his eight-year PGA Tour career, Smith has amassed more than $27 million and he has won six times on the circuit, highlighted by his maiden major victory at St Andrews in July.

The Australian's main reason for joining the Saudi-bankrolled circuit led by his compatriot Greg Norman was, drum roll please... down to the money.

"[Money] was definitely a factor in making that decision, I won’t ignore that or say that wasn’t a reason," Smith told Golf Digest.

"It was obviously a business decision for one and an offer I couldn’t ignore."

Oh, and that golden nugget that every LIV Golf player seems to be using these days, that they get to spend more time with their family and friends.

"The biggest thing for me joining is [LIV’s] schedule is really appealing," said Smith.

"I’ll be able to spend more time at home in Australia and maybe have an event down there, as well. I haven’t been able to do that, and to get that part of my life back was really appealing."

It would seem like the majority of GolfMagic readers are against seeing Smith switch allegiance - at least judging by the reaction to our latest social media posts, which have had more than 500 comments so far.

Here's a selection of reader comments:

"What a career mistake."

"He played the PGA Tour for Fools. He knew he was going he just decided to con everyone and play in the FedEx Cup."

"Another money chaser who could have been one of the greats."

"He can afford his gas and electricity this month."

"That's his career over then."

"Good for him. Hopefully the PGA Tour realises it won't survive without compromise."

"Bravo! Now it's about playing golf with no financial pressure. Tear it up champ!"

"Enjoy your money and golf irrelevance."

"He is the first PGA player to leave that I actually enjoyed watching play this past year. Shame."

"Ngl, I'm a little annoyed he left. Such a good player."

"A rich man wanting more, how much is enough now going to a second class Tour don't get it."

"Good luck Cam. You are right where you belong. Bye."

"Good move. Will be a big fish in a small pond."

"Anyone would move for that sort of money, no matter where it's coming from."

"Such a great golfer pursued by bigger bucks! I thought he would play for the love of the game. Guess not!"