The 19 players already AXED from the LIV Golf Tour 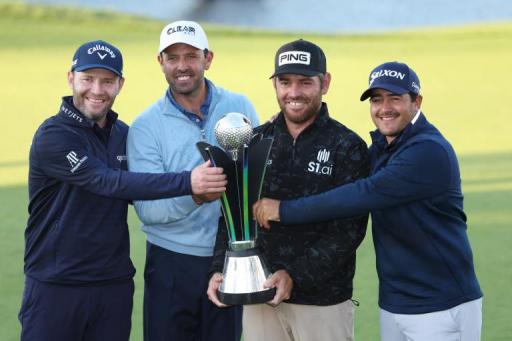 Out with the old and in with the new. LIV Golf has now axed 19 players in total since its first tournament at Centurion Club.

LIV Golf today welcomed six debutants to its fourth tournament of the season in Boston this week, none bigger than World No.2 and Open champion Cameron Smith.

Other players that have switched allegiance from the PGA Tour to the LIV Golf Tour this week include Joaquin Niemann, Harold Varner III, Cameron Tringale, Marc Leishman and Anirban Lahiri.

While LIV Golf will no doubt be delighted to have acquired the services of Smith, who is understood to have agreed a signing-on fee north of $100 million, it's fair to say a number of GolfMagic readers are particularly disappointed with his decision to leave the PGA Tour.

Two other players have been re-added to the Boston field in Adrian Otaegui and Sihwan Kim, both of whom last played in the second tournament in Portland.

In total, there are eight new players from the last tournament in Bedminster, and that unfortunately means eight players have had to make way due to the field size always being 48.

Hennie du Plessis, who finished second at Centurion and won the team event, will no doubt feel the most hard done by given he currently ranks sixth in most money won from the first three LIV Golf tournaments ($3.5 million).

The 8 players booted from LIV Golf after the last Bedminster tournament:

The 8 players added to LIV Golf since the last Bedminster tournament:

In total heading into the fourth LIV Golf tournament, 19 players have been axed from the Saudi-backed series since the first event at Centurion Club in June.

Of course as we have seen with both Kim and Otaegui in Boston this week, players can be reinstated when they have initially been dropped from a LIV Golf tournament. They can also play their way in via the Asian Tour, which LIV Golf is supporting with a number of tournaments on its International Series.

But with more and more big names arriving on LIV Golf from the PGA Tour, the chances for some of the lesser names to return or even remain on the 48-man roster are getting slimmer by the month.

Saying that, the PGA Tour did just announce some huge financial changes that could very well halt LIV Golf in its tracks when it comes to signing some more of the world's best players heading into 2023.

The 19 players currently axed from LIV Golf and how much money they have collected in LIV Golf events:

The tournament starts on Friday and concludes on Sunday. It is taking place at The International, which is near Boston, and as always with LIV Golf tournaments, the field comprises 48 players and there will be a shotgun start.

LIV Golf will then head over to Chicago for its fifth event from September 16 to 18.

Next Page: Which players have made the most money on LIV Golf so far?