LIV Golf Investments chief executive has drawn more criticism after another gaffe when trying to make a point about Saudi money in the ladies' game. 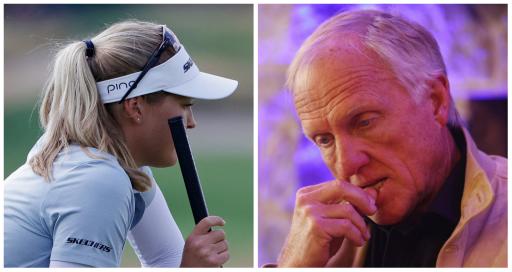 LIV Golf Investments chief executive Greg Norman has drawn more criticism after another gaffe when talking about the LPGA Tour.

Was this more than a slip of the tongue? According to The Great White Shark, 67, Aramco is the chief sponsor of the LPGA.

Incorrect. In fact, Aramco is the chief sponsor of the Team Series on the Ladies European Tour.

Fox News' Tucker Carlson was absolutely shocked with the "revelation" from the two-time Open winner.

Greg Norman: “The @LPGA Tour is sponsored by Aramco.”

How can the CEO of #LIVGolf get this wrong? Good Lord… pic.twitter.com/leCUHbhJv2

Norman, of course, was trying to make the point that there is little uproar when talking about Saudi money in the ladies' game.

Whereas the LIV Golf players have been constantly derided for their decisions to turn their backs on the PGA Tour.

Carlson also spoke with Bryson DeChambeau about LIV Golf. The American, 28, now feels his decision to join LIV has been vindicated.

Both interviews appear to have been recorded before the third LIV Golf event at Trump National in Bedminster.

The tournament was won by Henrik Stenson, who fired a shot at Ryder Cup Europe after he claimed victory on his LIV debut.

What did Norman say exactly about PGA Tour hypocrisy?

"The PGA Tour, I think, has about 27 sponsors on the PGA Tour... [they] do about 40 plus billion dollars worth of business on an annual basis in Saudi Arabia.

"Now, why doesn't the PGA Tour call the CEOs of each one of them and say, 'Oh, sorry, we can't do business with you because you are doing business with Saudi Arabia.'

"Not one word has been said about them? Why is it on the on the guys? Why are we the ogres? What have we done wrong? We are independent contractors, we have the right to go play wherever we want in the world for whatever we want."

"The PGA Tour has 27 sponsors who do $40 billion worth of business in Saudi Arabia on an annual basis."#LIVGolf Chairman Greg Norman exposes the PGA Tour's hypocrisy in interview on Tucker Carlson. pic.twitter.com/jMkLPHKsWf

Next page: LIV Golf tickets in Bedminster were selling for... $1