"This will end in tears!": Golf fans slam dispute between PGA Tour and LIV Golf

Golf fans weighed in on the PGA Tour rejecting players from being released to play in the first event of the LIV Golf Invitational Series. 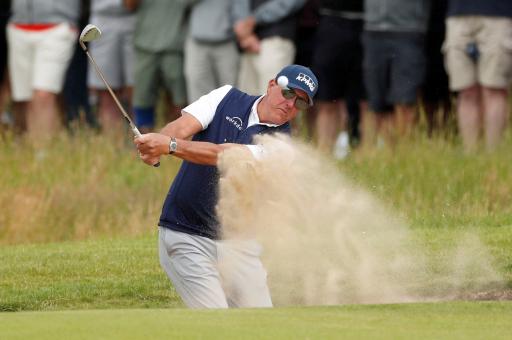 The PGA Tour and the DP World Tour have spoken. Their players aren't for sale and they won't be allowed to play in the LIV Golf Invitational Series.

On Tuesday night, the PGA Tour announced its ruling and stated that allowing releases would "significantly and unreasonably harm the PGA Tour and its sponsors."

They also stated in their letter that as numerous events in the LIV Golf Invitational Series are taking place in North America, these aren't one-off events and releases can't be given.

Earlier today, the DP World Tour followed suit and denied players such as Lee Westwood and Richard Bland the opportunity to play for the first $20 million purse at Centurion Golf Club in June.

Greg Norman, the CEO of LIV Golf Investments, has described the response of the PGA Tour as "anti-golf, anti-fans and anti-competitive."

In an interview with Sky Sports prior to these announcements, Norman defended his cooperation with Saudi Arabia and the Public Investment Fund which are bankrolling the new breakaway tour.

"I'm not getting into Saudi politics, I don't know what the Saudi government does with their political side of things. But every country has a cross to bear," Norman said.

The rejection of the PGA Tour and the DP World Tour could bring legal issues forward as players have been allowed to move freely between both of these tours and other ones in the past.

This was one issue that golf fans discussed on social media and the whole dispute brought up some very intriguing comments:

"I don’t understand why this is different than say the old days when Seve or any foreign player would play multiple tours like playing on the European Tour? Or the Asian Tour for a season or a few tournaments?" another fan commented.

"Bad move in my humble opinion. Granted it may be the less successful PGA Tour pros that leave, but what are the PGA then left with but a dozen or so champions and then a league full of 'bodies' just to make up the numbers?" one fan commented.

"PGA grow up, all this while you guys were paying players peanuts, let them go out and make some decent money for their families. Some players in PGA are struggling to make it to the top, let alone make any money. Stop your dictatorship," another fan said.

"The PGA and the DP World Tours can't be allowed to dictate where golfers play golf, I can see this ending up in the courts and turning into a golf-style Bosman ruling," one fan said.

"This will be their biggest mistake. History in other sports that opened to other leagues survived tremendously. Wake up PGA. Or, is it too late?" another fan commented.

Next Page: Greg Norman speaks up on LIV Golf Series: "I don't answer to MBS"