Anna Davis, 16, produced a stunning finish to make the weekend at the Palos Verdes Championship. 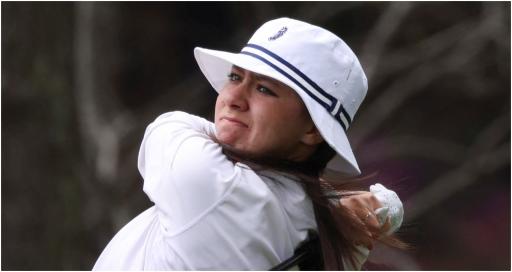 The 16-year-old with a fondness for the bucket hat earned an exemption into the competition and fired an opening first round of 71 to sit just inside the cut line.

But during Friday's second round she looked like she was struggling a bit as she found herself at 4-over par after 15 holes.

By the time she had reached the 15th hole she had recorded five bogeys and a solitary birdie at the par-5 seventh hole.

But at 16 she found and eagle and followed that with a birdie at the par-3 17th and made par again at 18 to squeak into the weekend.

She told the media: "I knew that I obviously had to make something happen to make the cut.

"I knew that I had to be kind of aggressive going into the last few holes.

"I then made an eagle, and then after that I was like, okay, let's play a little bit more conservatively so I make the cut, that was kind of what was going through my mind.

"It was my goal to make the cut so I'm glad that I could do that. It'll be cool to play this weekend."

Hannah Green held a three stroke lead going into the weekend at 9-under par.

Lydia Ko, Meghan Kang, Jin Young Ko and Minjee Lee were all placed at 6-under par before Saturday's third round.