Tiger Woods played a practice round at Southern Hills ahead of the PGA Championship. One fan caught this shot... 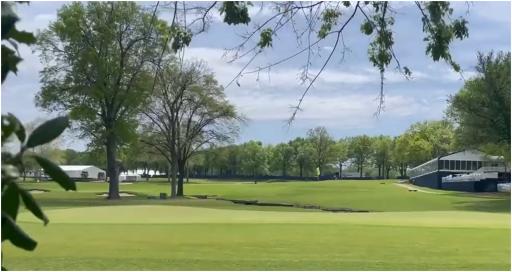 After the 86th Masters it was probably no surprise to see Tiger Woods touchdown in Tulsa on a scouting trip of Southern Hills.

Woods, 46, just about completed four rounds at Augusta National and was given a standing ovation by the patrons as he limped up the 18th.

It was 14 months after his car crash and now we finally have proof that wasn't just a one-off. That wasn't a last hurrah and a fond farewell.

We know now that going forward Woods will follow this routine for the next few years until he calls time on a glittering career.

His fans will track his private jet. The media will follow him. Footage will leak of his practise round. Rinse and repeat.

It was during the Masters champions' dinner that Woods revealed to Jack Nicklaus his intentions going forward.

"What am I gonna be next year? And [the doctor] says, 'You're still gonna hurt.'

"He said, 'Well, why in the world would I wait a year to play if I know I'm gonna hurt both years?

"Why don't I just get back and start playing and just suck it up?'"

Suck it up he did. We all know that Woods is on borrowed time.

But have we learned anything from the latest sighting? And what do we expect at Southern Hills?

Well, he was still wearing a pair of FootJoy golf shoes so he still hasn't worked out any comfortable footwear with Nike yet.

The compression sleeve was back on his right leg and there was still a visible limp.

Yet eagle eyed viewers will have noticed he was placing considerable weight on his right leg as he leaned over to pick up his tee.

He also opted to avoid the stairs and march up the hill to one tee box at Southern Hills.

One fan, hiding in the bushes, also caught a dart:

Tiger throws a to 6 lol pic.twitter.com/YqJ7GjHgQt

Woods looked like he was fairly stable throughout the golf swing, too.

It is absolutely arguable that Woods could be in much better physical condition than Augusta if he chooses to play the PGA Championship.

What can we expect from Woods if he plays the PGA Championship if all goes to plan?

Well, he has won a PGA Championship there before. But that was 15 years ago.

He does not know the course as well as Augusta and it will be set-up for a completely different test.

Yet there is also one thing in his favour, too. It will be warm - or should be - so that will help his fused back a great deal.

It was no surprise to see Woods struggle during his second and third rounds at Augusta when the temperature dropped.

It was so cold that Collin Morikawa covered his face and looked like a ninja.

Elsewhere, it's hard to judge just how much we can take from this latest sighting. Just the same old Tiger, really.

Still, it's exciting for golf fans.

During his latest practice round there was a helicopter taking video from above.

A bit over the top if you ask me, but he is truly the needle mover.