Higgs on DeChambeau: "Just grab your 7-iron man and hit a golf shot" 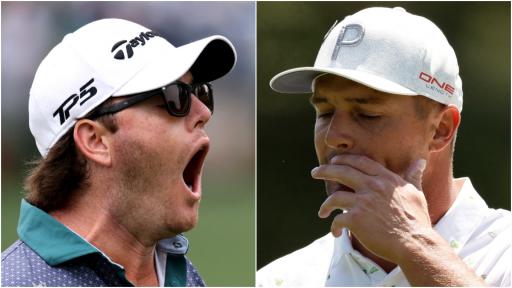 Higgs, speaking to Harmon on GOLF's latest episode of 'Off Course', discussed what it was like to be around DeChambeau back in their days at Southern Methodist University (SMU) and how things have hardly changed on the PGA Tour today.

"I think Bryson has stayed the same level of weird," Higgs told Harmon.

"And I say that with all due respect."

Higgs added: "He obviously does things in Bryson’s way, which is very different.

Higgs also admits he hadn't a clue what the Mad Scientist was up to ahead of his rounds of golf, especially in regard to his single-length club setup that he continues to adopt today.

"I didn’t understand any of the stuff that he was doing," said Higgs. "The single-length irons, all this stuff. I was like, argh. But he spent so much time on his equipment and the golf ball."

And don't even get Higgs started on all that epsom salts nonsense.

"Just grab your 7-iron, man, and hit a golf shot. You don’t need to go through all this.

"But the results spoke for themselves, dude. And part of the reason why he is who is he and he’s had the success that he’s had, he doesn’t give a s—, and he knows he’s weird, and he’s just gonna make his weird stuff work."

What do you make of Bryson DeChambeau's unique take on the sport? Share your thoughts and comments over on the GolfMagic social media channels or come and join us over on YouTube.