Kevin Na responds to Murray dispute: "Not exactly how it went down"

Kevin Na has reacted to Grayson Murray after the pair had a tense exchange on the range ahead of the Mexico Open. 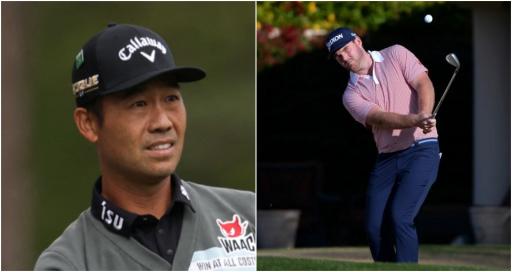 Kevin Na says his spat on the range with fellow PGA Tour pro Grayson Murray was not exactly how he described.

Things reportedly got a little bit heated between the pair when Na spotted Murray practising ahead of the Mexico Open.

Murray claimed that Na instigated the exchange that involved "a lot of profanity" as the two reportedly almost came to blows.

"I went right up to his face and held my ground," Murray told The Stripe Show Podcast about the moment in front of players and caddies.

"And I told him, if I wasn't going to get suspended right now I'd drop his a** right there on the range."

Well, there are two sides to every story and Na has offered his response and told Golf Channel that's not entirely what happened.

"That's not exactly how it went down, but I'm over it and I'm moving on," Na said.

"[I am] looking forward to having a good week here in beautiful Mexico."

Why did this happen in the first place?

Hilariously, it was off the back of a tweet Murray had posted about Kevin Na and his... deliberate pace of play:

A back-and-forth followed and it appears that at the Mexico Open this was the first time they saw each other in person since that.

What did Grayson Murray say to The Stripe Show podcast?

"I was hitting balls on the range, and just kind of had my head down walking to the chipping green. Sure enough, I hear someone yelling and cussing at me.

"I won't repeat every word he said, but basically there was a lot of profanity involved, and calling me a not-so-nice word about how I should have said it to his face in person.

"I guarantee every one of them could hear what he said, and the caddies.

"I went right up to his face and held my ground, and I told him, if I wasn't going to get suspended right now I'd drop his a** right there on the range.

"Because what he said was very immature and I know he wouldn't have said it to me if we were just seeing each other outside of the golf course.

"It was a very immature thing to say four months later, and to do it on the range, which he knows is his safe spot, he knows that I'm not going to do anything to him, he's just provoking me."

"It's golf, I'm going to move on. And like they say, I'm living 'rent-free' in his head right now.

"I told him, if he goes and plays in the Saudi League, no one's going to miss him on this tour."