WATCH: Spectator told off after picking up Nelly Korda's golf ball during major

A spectator was filmed picking up Nelly Korda's golf ball during the final round of the Amundi Evian Championship at the Evian Resort Golf Club. 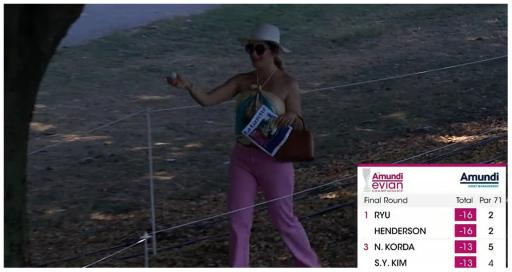 It's fair to say Nelly Korda has had an interesting week during the Amundi Evian Championship.

She has managed to make a par after finding her golf ball fully submerged in the water.

You can watch that here:

No pictures on the scorecard.@NellyKorda would go on to save par from here. pic.twitter.com/msW9SvI7hm

Then after playing her third round, Korda, 23, swore in her post-round press conference in a joking manner.

She was frustrated with her play and was asked what she would be doing between then and the final round.

Her response? "Trying to get my s*** back together." That's not what we would consider a typical Nelly response.

Now it's got a little bit more interesting...

Playing the final round of the women's major in France at the Evian Resort Golf Club, a spectator thought they had found a souvenir.

In fact, it was Korda's golf ball. And they just...picked it up!

This unfolded on the par-4 sixth hole in Évian-les-Bains. As the golf ball comes to rest on the wood chippings on the right hand side of the fairway, a female spectator picks it up and appears to want to hand it to one of the marshals.

It looks like they are informed that they should not have done that and this caused a bit of a shocked reaction from the spectator.

There are frantic arm movements from the marshal. We would absolutely love to know what was said!

A fan picked up Nelly Korda's ball while it was still in play pic.twitter.com/tRzpMrkaEB

I mean, if you know absolutely nothing about golf why would you dare even touch a golf ball?!

Oh dear. Thankfully for the younger of the Korda sisters, she was not penalised.

The Rules of Golf state: "If your ball is moved by an outside influence, such as an animal or a spectator, there is no penalty to anyone and the ball must be replaced."

Korda went on to make a double bogey on the hole, but bounced back with a birdie and an eagle to get back into contention.