This LPGA Tour pro was attacked by fire ants during her second round of the Chevron Championship at Mission Hills. 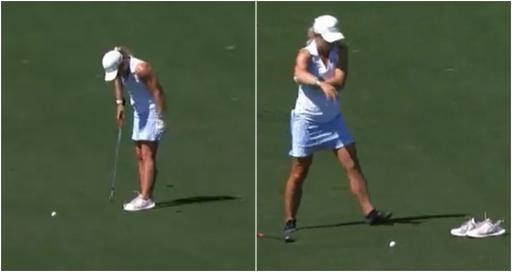 When you are playing in a major the last thing you want is to be attacked on the golf course, but this LPGA Tour pro was.

Lindsey Weaver was playing the par-5 ninth hole during Friday's second round at the Chevron Championship at Mission Hills when this happened.

The 28-year-old pro can be seen looking down at her feet, club in hand, before realising she was being attacked...by fire ants!

She had to ditch the shoes...and sharpish. Weaver later told Golf that the ants were in a pile in the middle of the fairway and she was blissfully unaware.

Weaver, who went on to comfortably make the cut after shooting an even par round of 70, told the publication there was: "Panic...absolute panic!"

Lindsey Weaver just had do ditch her shoes after discovering she was being attacked by fire ants mid pre shot routine.

Fortunately for the pro, she did not sustain any bites and she was actaully awarded relief per Rule 16.2.a under the Dangerous Animal Condition.

This is to protect players if they are likely to receive injury from a dangerous animal if they were to play the ball as it lies.

What was even more humourous for Weaver is that she went on to make birdie at the hole. Still, she would have preferred not to have this heart in mouth moment.

Japan's Hinako Shibuno held the 36-hole lead by one stroke over Jennifer Kupcho.

England's Georgia Hall was inside the top-10. Jessica Korda was five strokes off the lead after two rounds.