Jennifer Kupcho says it was "surreal" to be the last winner to jump into Poppie's Pond after winning the first major of the year. 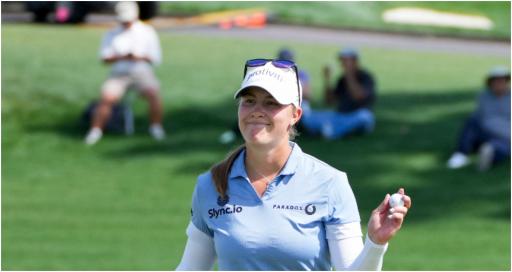 Jennifer Kupcho says it was "surreal" to be the last winner to jump into Poppie's Pond after claiming the first women's major of 2022 as she admitted she is used to hearing crowds support other players.

Kupcho overcame a back nine wobble to claim the Chevron Championship at Mission Hills Country Club. What made it all the more special was that it was her maiden LPGA Tour win.

She started the final round with six-shot lead but made bogey at 10, 13 and 14 which saw her advantage over Jessica Korda reduce to two strokes.

Kupcho made bogey at the par-5 18th with a nervy three-putt but in the end it was enough to seal victory. Her caddie and husband leapt into the water.

She will be the last winner to carry out the long-standing tradition as the tournament will be moving to Houston next year.

More: Jordan Spieth "half the player he used to be"

Kupcho said: "I think it's surreal. To be a major winner is really special, and to be the last person here at Mission Hills to jump into Poppie's Pond, it's all really special."

The fans were really with Kupcho as she battled to make it to the clubhouse. She was a popular player at the Solheim Cup.

As she walked up to the final green her playing partner Patty Tavatanakit waited for her to stride out in front, then applauded with the rest of the spectators to the deserved winner.

Kupcho said: "It's special. Honestly, I think one of the biggest things I've fought over the last year and a half is everyone is out here cheering for Nelly [Korda] or Lexi [Thompson] or someone else I'm playing with.

Last year the LPGA Tour announced that it was bringing Chevron as the title sponsor for the first major of the year.

It increased the prize purse from $3million to $5million.

The field was without Nelly Korda, who recently suffered a blood clot.