Rory McIlroy has been speaking about his Masters preparation as he bids for the Grand Slam. 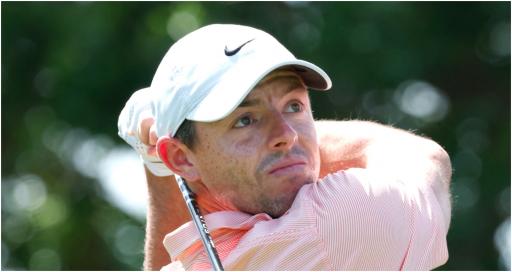 Rory McIlroy has revealed there is a slight tweak to his Masters approach this year: the absence "cramming" in preparation.

Typically the Northern Irishman will arrive early and get in plenty of practice rounds, but this year he changed things up.

McIlroy arrived to Augusta National earlier this week for a brief scouting mission on the same day Tiger Woods jetted into town.

The 32-year-old Northern Irishman would not be drawn into saying whether or not he thinks Woods, 46, will make a sensational comeback.

He did, however, say it would be phenomenal if Woods were to play and that it was great have the 15-time major champion back around the game.

McIlroy said when asked if he had changed anything this year with regard to his preparations: "Yeah, I mean, a little bit, I guess. I was at Augusta the last couple of days and I just went there on my own.

More: Tiger Woods LIVE MASTERS updates as and when they happen

"I didn't go with any members, I didn't -- I didn't sort of do the whole stay on property. I just wanted to come and see the golf course.

"I just wanted to go there and just see that for myself and sort of do a little bit of a scouting trip that I haven't really done the last couple years.

"That's a little different maybe. But it was good to be there, good to see the place.

"At least coming into this event and playing this week, I don't feel like there's a rush to get there next week and cram and prepare.

"I feel like I've already done most of my work, which is a nice feeling."

If McIlroy were to win the first major of the year he would complete the Grand Slam.

He has had several chances to win at Augusta but he has frustratingly seen them slip through his fingers.

Perhaps the 2011 Masters is the one that really got away.

Aged 21, he had won at Quail Hollow and recorded nine top-10s on the European Tour and was No.7 in the OWGR.

He had also played a key role in Europe's Ryder Cup win at Celtic Manor in 2010. He was in sensational form.

But McIlroy endured an incredible collapse which included four-putting the 12th hole as he threw away a four-shot lead.

McIlroy was asked if he feels he is in a much better spot this year compared to last year.

He said: "Yeah, chalk and cheese.

"Actually, I wanted to play this event [the Texas Valero Open] last year, but after The Players and the Match Play, I felt like it was better for me to just work on my swing at home and just work on my game because at least I had an opportunity to do that going into Augusta.

"So yeah, it's way different. I'm way more comfortable with my game, I'm happy with where everything is. Everything seems like it's a lot more settled."

Will this year be the year for McIlroy?

Subscribe to our YouTube channel to get the latest reviews, interviews and more
The Masters
Rory McIlroy
Tiger Woods
Augusta National
hideki matsuyama
Ryder Cup
Previous
Hideki Matsuyama: "I never thought it would receive the attention that it did"
Next
Pro golfer has car stolen and breaks club during PGA Tour Canada Q-School
Latest News
Equipment news
NEW Titleist TSR Drivers and Fairways introduced on the PGA Tour
Golf news
WATCH: Is this the LUCKIEST crazy golf hole-in-one of all time?!
Golf news
Paige Spiranac makes fun of herself after critic tweets she has a "horse head"
Golf news
Paige Spiranac voted 'Sexiest Woman Alive' by MAXIM
Equipment news
At the US Open, Justin Rose reveals why he left TaylorMade for Honma
Latest Reviews
Wedges
Have the Titleist Vokey SM9 Wedges IMPROVED my game?
Budget Sets
MacGregor CG3000 Package Golf Set Review: "Best Golf Beginner Set of 2022"
Putters
TaylorMade Spider GT Putter Review: "Incredible looks, superb feel"
Drivers
Could this be your NEW DRIVER? | PXG 0211 Driver Review
Footwear
Under Armour HOVR Tour SL Golf Shoes Review: "Our favourite UA Golf shoe"
Equipment Reviews
Equipment
FootJoy's Blues Collection is perfect for your game this summer!
Equipment
Peter Millar have an AMAZING selection of golf shorts!
Equipment
The BEST PUMA golf polo shirts as seen on the PGA Tour!
Equipment
The BEST Nike Golf shirts as seen at the PGA Championship
Equipment
NEW VICE Pro Drip Silver Hills Golf Balls: Limited Edition
Latest Tips and Instruction
Tips and Instruction
Learn how to chip like a winner on the DP World Tour!
Best tips and instruction
What can we learn from Jordan Spieth's new pre-shot routine on the PGA Tour?
Tips and Instruction
How to NEVER MISS another short putt with Manolo Vega!
Tips and Instruction
Sergio Garcia tells Me and My Golf GREAT driver tip: "Pull the chain!"
Tips and Instruction
Top golf coach Manolo Vega teaches you how to ATTACK pin from 50 yards
Related Articles
PGA Tour
Why Tiger Woods will carry on, according to one PGA Tour legend
PGA Tour
"Rory gets a pass?!" Paige Spiranac after McIlroy stormed out of US PGA
US PGA
Tiger Woods WITHDRAWS from 104th PGA Championship after third round 79
US PGA
Tiger Woods hints at possible WD after worst ever round at US PGA
US PGA
Who is PGA Tour star Will Zalatoris' girlfriend? Meet Caitlin Sellers