"I'm very pleased. It may not seem like that, but I'm pleased." 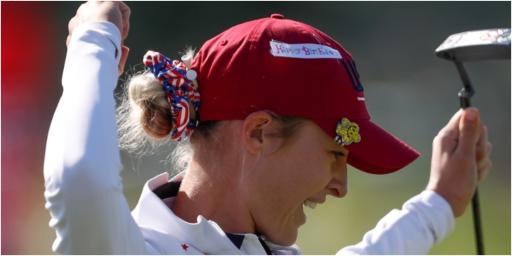 When it came down to it there was not a lot Nelly Korda could do.

The 23-year-old American had to sit back and applaud the mastery of South Korea's Jin Young Ko as she defended her CME  Group Tour Championship title.

Korda had a front row seat as superb Ko hit every green in regulation at Tiburon Golf Club as she claimed the LPGA Tour player of the year.

In only 63 strokes Ko showed us just why she has won five times this season, a feat that was last achieved in 2016.

That time it was Ariya Jutungarn. Before that it was Annika Sorenstam.

Are you kidding?! @NellyKorda eagles 17 to take a share of the lead at the @CMEGroupLPGA pic.twitter.com/Yqeau1Yjv6

In the process, she won $1.5 million for pipping the young American to the honour and did so with an injured wrist.

She didn't even warm-up beforehand and yet. And yet. She still managed to go bogey-free leave Korda and the field in her wake.

As for Korda, she just had to sit back and admire the mesmerizing 26-year-old: "It really was cool to witness," she said.

Korda also told the media: "Obviously, I wish I could have kind of given it a better run, but in all, I think I had a great year.

"So, I'm just going to kind of look back on that and enjoy it.

"But today was - she just played amazing golf. There is not much you can do. Just sit back and watch honestly."

Jin Young Ko since joining the LPGA Tour in 2018:

Korda finishes the year with four victories, including her maiden major win and an Olympic gold medal.

"It's honestly been crazy," Korda said.

"You know, a lot of people tried to put like the award situation I feel like in my head a little, and I guess sometimes that gets the best of you.

She added: "I'm very pleased. It may not seem like that, but I'm pleased."

Korda will only take a few weeks off before heading to play the PNC Championship with her father.

Perhaps we will see the Kordas versus the Woods'?