Augusta "strongly encouraged" Phil Mickelson "not to come" to The Masters

Augusta National officials reportedly told Phil Mickelson to not come and play in The Masters this April, according to multiple sources. 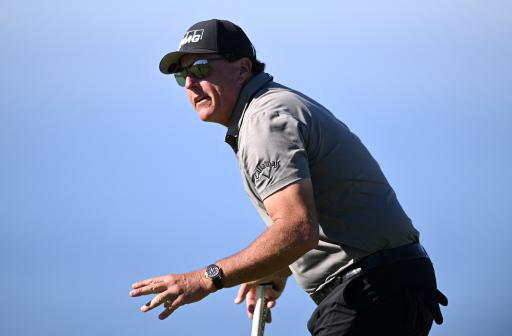 Phil Mickelson was reportedly told not to come to The Masters by officials at Augusta National and there are whispers he has been suspended from the PGA Tour.

As reported by Golfweek's Craig Dolch, it could be that Mickelson was strongly encouraged to not participate at The Masters in April due to the frenzy it could cause.

It is the first time that the six-time major champion will not walk the fairways in Georgia in 28 years, as his legacy on the PGA Tour hangs by a thread.

There are also sources that suggest that the tour have completely suspended him over his actions in previous months, such as his collusion with the Saudi golf league, now the LIV Golf Invitational Series.

In an interview with Alan Shpinuck, Mickelson admitted to alleged atrocities that happen in Saudi Arabia and described them as "scary mother******s." His justification was to gain leverage over the PGA Tour to make improvements.

In his statement when he announced his break from the circuit, Mickelson apologised to those he negatively affected with his comments, but he still described those involved with the LIV Golf Invitational Series as "visionaries."

But prior to this, Lefty had accused the tour of "obnoxious greed" for supposedly concealing the media rights and archival footage of players, footage that is worth millions.

The 51-year-old's comments on the tour's finances come at a stage where he had earned a total of $95 million on the tour and potentially over $700 million in endorsement deals.

There have been a number of transgressions that could've led to Mickelson's potential suspension, but the PGA Tour tend not to publicly announce suspensions.

This is another chapter of a sad stage of Mickelson's career. He has won three Green Jackets among his 45 tour wins. He is responsible for iconic moments which could now be tarnished.