Rory McIlroy: "I don't care where I am on the leaderboard, I played well"

Rory McIlroy was content with his opening round at The Masters despite being six strokes off the lead at Augusta National. 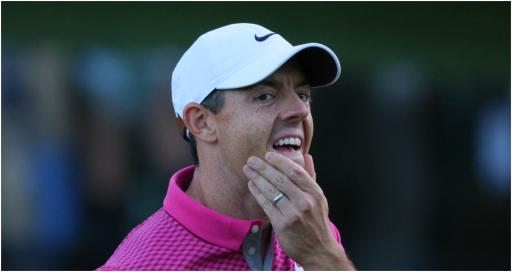 Rory McIlroy admitted he did not care where he found himself on the leaderboard after his first round at The Masters because he felt he played great.

Related: What is happening here between Tiger Woods and Rory McIlroy?

McIlroy, 32, now looks like he might need divine intervention of he is to capture the career grand slam.

The Northern Irishman turned in level par after making an ugly bogey at the sixth hole. One birdie and two bogeys followed on the back nine.

That included a wonderful up and down at the 18th which he said will give him confidence heading into Friday's second round.

He said: "I'm just pleased that I played well. I don't really care where I'm at on the leaderboard or it doesn't matter. I played well.

"I hit the ball great from tee to green for the most part. So I'm pleased with that."

McIlroy has played 30 rounds under par at Augusta National with a scoring average of 71.4 in his Masters career. This is his 14th start.

He found 86 per cent of fairways in his opening round and 72 per cent of greens. The Ultsterman struck the ball well but the putts didn't drop.

McIlroy added: "I'm encouraged with how I played, so I've just got to try to get more out of the round tomorrow."

The course will dry out over the next 24 hours. Some pros have suggested that this will mean carnage as it will make it all the more difficult to hold the ball on the lightning greens.

McIlroy was asked how he finds his zen place to get moving in the right direction up the leaderboard.

He said: "I think once you get the first tee shot out of the way, it's just business as usual. The hour or two leading up to that first tee shot, there's nerves and anxiety and all that sort of stuff."

McIlroy added: "Honestly, I envision where's the worst place I could hit it off the first tee, and then I'm like, well, that's actually okay. I could probably make a four from there, and that's sort of how I settle myself down."

Brooks Koepka was playing alongside McIlroy and endured a torrid back nine. Koepka turned in 2-under par after making birdie at eight and nine.

Sungjae Im held the first round lead by one stroke over Players champion Cameron Smith after shooting a opening 5-under par 67.