Masters rookie: "Until my caddie starts hitting them, he can have more say"

Harold Varner III admitted his caddie did not feel good about his player taking a shot on from the pine straw. 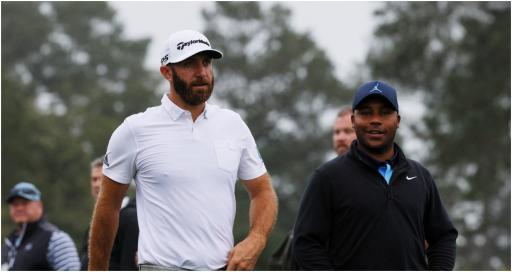 Harold Varner III appeared to have an interesting conversation with his caddie as he made eagle en route to an opening 1-under par 71 on his debut at The Masters.

Varner III was not exactly in prime position on the par-5 13th hole at Augusta National and found the pine straw with an errant drive.

But the pine straw, as we have seen down the years, can make or break a competitor and the American later said he was just playing to win.

He said he was just trying to make birdies. That approach is a bold one, you could say, for a first timer.

Speaking to the media after his first round, which saw him occupy a tie for 10th place, Varner said his caddie did not feel good about him taking the shot on. Not at all.

Varner III did though. He had 227 yards to the pin and he felt comfortable over the shot as he could dig his feet right in.

Did his caddie say another word? Varner III joked: "Nothing. I was hitting it. Yeah. I mean, until he starts hitting them, then he can have more say."

"This is very bold," said Sir Nick Faldo on the commentary. "Look. At. This!" added Jim Nantz when the ball came to rest.

He told the media he hit a 4-iron. That shot then ended up stiff, only about one foot or so away for a tap-in eagle.

That's quite a shot to hit on your first ever appearance at The Masters.

Varner III has been a consistent performer on the PGA Tour for a while now. The lack of victories is somewhat confusing.

But he broke through at the Saudi International earlier this year. "I think it's given me even more self-belief," he said.

"I feel like I've been getting close the last two, three years. I've had some good chances. Just didn't close it out. Yeah, a little bit more swag."

Brooks Koepka has spoken in the past about some players just psychologically playing themselves out of the majors which he believes gives him an edge.

Varner III doesn't subscribe to that theory. Does anything bother him at Augusta National?

"Nothing. No one is going to die. I just get up there, and I try to hit the best shot I can and keep doing that on every shot," the 31-year-old said.

"I don't really -- it's just all about perspective, I think. I've always thought that."