The Masters 2022: You simply have to watch this Tiger Woods meme!

As Tiger Woods has the golf world on pause over his decision on The Masters, some are seeing the funny side of it. 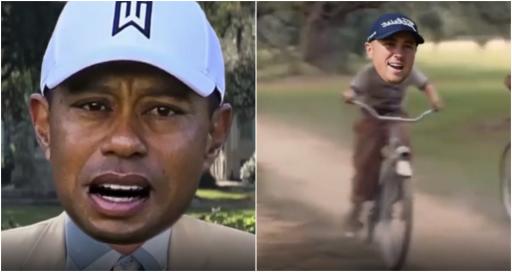 The golf world is a relatively small place when you think about it, but Tiger Woods currently has it on pause.

Woods, 46, is reportedly mulling over a decision about whether or not to play the 86th Masters next week.

The PGA Tour does not run The Masters, therefore there is no contractual obligation for players to confirm if they will play or not.

Past green jacket winners usually inform Augusta National whether or not they will be in attendance in their own time.

Phil Mickelson quietly informed Augusta that he was not going to play The Masters for the first time in 28 years.

Ian Woosnam, too, decided it was time to call it a day. They join the list of 16 past champions eligible to play but have elected not to.

Hence why Woods is trying to take as much time as possible to see whether he thinks his ageing frame can manage the 72 holes.

Usually, the 5pm before tournament week on the PGA Tour marks the time where players commit or not as the field lists are confirmed.

But yesterday, on 1 April, there was radio silence from Team Woods. There were of course a lot of April Fools jokes doing the rounds.

There is no denying - whether you love him or hate him - if  Woods were to tee it up at Augusta National it would be sensational.

The fact we are even having this conversation is remarkable. It was only in February of 2021 that Woods' SUV toppled over a hill.

Pulled from the wreck, he had suffered open fractures to his right leg and was in danger of losing the limb. He was lucky to be alive.

Fast forward 14 months and here we are waiting on the biggest ever Tiger Woods comeback. He is close, we know that much.

Over on Instagram, @forthetour may have just dropped the funniest Tiger meme yet.