The Masters Par 3 Contest: Highlights and pictures from Augusta National

Here is everything you may have missed from The Masters Par 3 Contest at Augusta National. 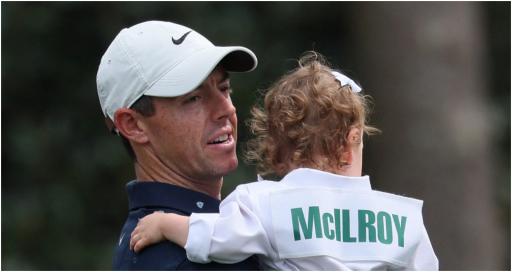 Concerns over inclement weather meant the annual Masters Par 3 Contest had to be called off early.

By day's end, there was a three way tie for the lead between Mike Weir, Kevin Na and Mackenzie Hughes. They will share the win.

Of course, it is first and foremost a family event with the players' significant others and their children dressed like the caddies.

The first Par 3 Contest was held in 1960. Over the years we have seen some incredible highlights over the nine-hole course.

Justin Thomas and Rickie Fowler made aces back-to-back in 2016. Jack Nicklaus saw his grandson G.T. make a hole-in-one in 2018.

This year Tiger Woods was rumoured to be participating with his son Charlie but in the end he decided against it.

Rory McIlroy said in the past the Par 3 Contest was an afterthought but now he sees it as one of the highlights of the week.

McIlroy, 32, was pictured laughing and joking as his adorable daughter Poppy clung to her father.

Rahm said of the contest: "I'm just trying to make a hole-in-one.

"I'm trying to get the hardware. Some of those crystals we get are really fun, some of the glasses.

"I've been able to hit it closest to the pin once before on one of the Par 3 events. I'm hoping to get it back. That's about it.

"I had Kelley [wife] putting. We break so many rules. I don't know if in good conscience I can put that score in there."

The first ace of the day belongs to Jason Kokrak. #themasters pic.twitter.com/OE0391L2oQ

Weather Update: Due to inclement weather conditions and safety concerns, play was suspended for Wednesday's Practice Round.

The current forecast will not permit the reopening of the grounds and the gates are now closed for the remainder of the day. #themasters

We had a hole-in-one and that came courtesy of Jason Kokrak at No. 4 from 125 yards.

Elsewhere, Louis Oosthuizen drained one of the most ridiculous putts of the day.

Gary Player showed his enduring class, too, and stiffed more than a few shots close to the pin.

Nicklaus will be joined by new honorary starter tomorrow with Tom Watson and Gary Player.

There will undoubtedly be a tribute to legendary golfer Lee Elder, who died last November aged 87.

Check out the full scores from the Par 3 Contest here.

Pictures from The Masters Par 3