Richard Bland will need to win on the PGA Tour this week to force himself inside the world's top 50 play The Masters. Or he needs an invite. 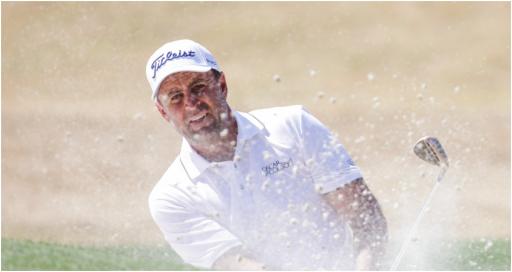 England's Richard Bland says he needs Augusta National to look on him kindly if he is to make his first appearance at The Masters aged 49.

Bland stole our hearts last season when he won his first European Tour event last May becoming the oldest first time winner aged 48 after he managed to beat young Italian star Guido Migliozzi in a playoff at The Belfry.

When he won the British Masters on his 478th attempt at a European Tour event, it led to one of the most emotional moments in recent memory as he was interviewed by his coach and Sky Sports on-course analyst Tim Barter.

Neither could get through the interview without a shedding a tear.

Since then, Bland has continued to put in a string of impressive performances. He almost claimed what would have been a huge second win at the Dubai Desert Classic earlier in the season but he lost out to Viktor Hovland in another playoff.

Such has been his consistency it led Bland to reaching an all-time career high in the Official World Golf Ranking of 53.

Sounds good, right? Absolutely it is. It is a herculean effort. The only problem for Bland is that only the world's top 50 are invited to Augusta National for The Masters.

Now Bland needs to win the Valero Texas Open on the PGA Tour this week where Jordan Spieth is the defending champion to book his place. Failing that, he needs Augusta National "to look on me kindly".

Bland has played Augusta National before, but only because one of his pals is a member. He also was booked in to play TPC Sawgrass later this month, he said, before heading out to play Augusta National on 22 April.

But he would prefer to play in the major, of course. He doesn't really watch much golf at home, he said, adding: "But the Masters I'm there from the first shot to the last putt. I don't move.

More: Phil Mickelson was "strongly encouraged" not to attend The Masters

"It's just the best tournament to watch on TV and I can only assume it's a million times better to play in it."

What does Bland think of his story, doing what he is doing at the age of 49?

Bland said: "Yeah, obviously the messages that I get from people that, all over the globe, over the last 12 months has been incredible.

"People that you never will ever meet and they tell me their kind of story that what I've done has inspired them to carry on their journey.

"They were losing a little bit of hope, and [asking] 'am I going down right path?', and it's given them that extra sort of belief that they are on the right path.

"And that's, reading them [text messages] is quite emotional. I will always keep them.

"Whenever this phone gets sort of upgraded or whatever, all those messages will stay forever. That's something that I will cherish very deeply."

Unfortunately 3 places short #53. Need a win this week at The Texas Valero or Augusta to look on me kindly #masters

Golf loves a feel good story. There is no doubt that Bland deserves his chance to take the trip up Magnolia Lane, but then again a lot of players outside the top 50 could make their case, too.

Still, if he doesn't win in Texas and he doesn't get the invite, then you have absolutely no doubt that he will never give up trying.

Just look at his answer when he was asked if he ever doubted himself. Did he lose hope when he lost his European Tour card?

Bland said: "Never. Never. Even when I lost my card in 2018, I always kind of thought one year doesn't make you a bad player, you don't become a bad player overnight.

"Not when you've played, certainly on the European Tour for 15 plus years. So yeah, I knew what was in front of me going back to the Challenge Tour at 46 years old, but I knew that I wasn't done.

"So I still have plenty of golf left in me. So, no, I never for one second thought that's it, I'm done."