Rory McIlroy: "A few weeks ago at his house that didn't look possible"

Rory McIlroy says when he visited Tiger Woods it did not look possible he would be playing The Masters. 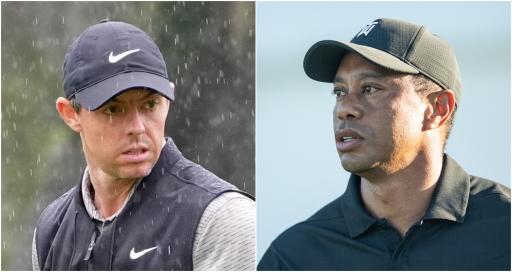 Rory McIlroy says visiting Tiger Woods a few weeks ago it did not seem possible he could consider playing The Masters.

Live Tiger Woods updates ahead of The Masters

Woods, 46, sent the golf world into a frenzy earlier this week when he arrived by his private jet with son Charlie Woods at Augusta National.

It fueled speculation that he was in fact really making a monumental charge to play the 86th edition on the 25th anniversary of his 1997 win.

Woods reportedly played alongside Justin Thomas in a practice round and also bumped into McIlroy, who was also on a scouting trip.

The 15-time major champion has until Saturday to make his mind up. But sources close to him suggest that he will likely play.

McIlroy is playing the Valero Texas Open this week in his final event before the first major of the year. He was asked about Woods.

More: Everything you need to know about the Valero Texas Open

"He's doing everything he can to see if he can play... It would be a monumental achievement."

Rory McIlroy shares his thoughts with @KiraDixon on the possibility of Tiger Woods teeing it up in @TheMasters. pic.twitter.com/thkPhleus3

McIlroy told Golf Channel: "It's unbelievable. I spent some time with him a few weeks ago at his house [and] at that point it didn't look possible.

"He's definitely made a lot of big strides over the last few weeks and look I saw him yesterday at Augusta...he looked great.

"Walking 18 at Medalist is not like walking 18 at Augusta, so, y'know, he's being very conservative but he's doing everything he can to see if he can play.

"If he does it would be a monumental achievement from where he was this time last year. Everyone would love to see him there regardless.

"If he plays or doesn't play, if he goes to the champions' dinner, or plays the par-3, whatever it is, having Tiger Woods around the game again is great for all of us.

"It's great to see him up and back and as you said just considering playing next week is a great thing."