Scottie Scheffler already has plans for his Masters 2023 dinner

Scottie Scheffler says he is having some light-hearted fun with the green jacket and already knows what's on his menu. 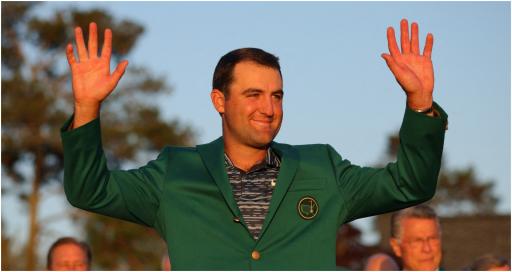 World No.1 Scottie Scheffler returns to PGA Tour action this week for the first time since winning the Masters. But it's safe to say he's already thinking about his major defence.

Scheffler decided to sit out RBC Heritage and is partnering Ryan Palmer at TPC Louisiana for the Zurich Classic of New Orleans.

And although he will have no doubt let off some steam since that famous win, he has revealed he's having some light-hearted fun with the green jacket at home.

In an interview with GolfWRX, he said of his new favourite piece of clothing: "You know, it's kind of funny. I put it on the other night.

"Meredith [wife] and I were just sitting around. I thought it'd be kind of a funny joke.

"We were having dessert, and I just went back in the other room and grabbed the green jacket and put it on and eat my ice cream with the jacket on. Just being us at home, having fun with it.

"Honestly, probably not too much[wearing it]. It's just one of those cool things I'll keep it in the golf room. I want to represent the club well. I'm only going to wear it for certain special occasions."

He proposed to Meredith at Arbor Hills Nature Preserve in June 2020 and he got a resounding yes.

In the aftermath of his memorably victory, he revealed how he leaned on Meredith for support when he felt fully overwhelmed with the occasion on that Sunday at Augusta National.

Jordan Spieth also revealed over the weekend how his wife Annie gave him some golf advice, something that she rarely offers.

It led to him taking an extra five seconds over his short putts.

Elsewhere, Scheffler has given an insight into what his menu will look like at the Masters' champions dinner next year.

"I'm a meat and potatoes guy," he told the publication.

"I hope everyone there enjoys their meat and potatoes. If not, they might be going hungry," he added.