What Tiger Woods said to Jack Nicklaus during the Masters dinner

Jack Nicklaus has revealed what Tiger Woods said to him about his future during the Masters' champions dinner. 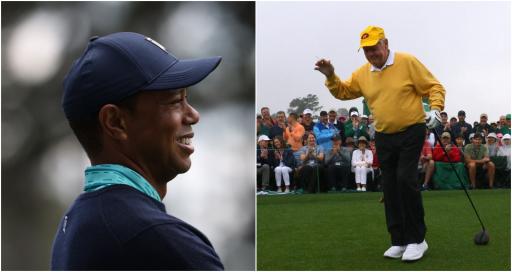 Tiger Woods always sits next to Jack Nicklaus at the Masters' champions dinner. And how we'd love to be a fly on the wall.

There are a lot of things said and discussed that we will never get to hear. But some stories are trickling through now.

We know that Hideki Matsuyama impressed his fellow green jacket wearers with his speech in English after serving up some amazing cuisine.

And we also know that honorary starter Gary Player, who won the Masters three times, also gave a memorable speech in Japanese.

And the Golden Bear has revealed that he had an interesting conversation about Woods and what he said of his future.

Woods, 46, sent the golf world into a state of frenzy in the days leading up to the 86th Masters after weeks of silence.

When he did announce he was going to participate the build up went into overdrive. It was Tiger mania.

Nicklaus told SiriusXM PGA Tour Radio: "I couldn't possibly give you any idea what he went through the last 14 months.

"I think only Tiger could do that. I'm sure that what he went through was very difficult.

"Tiger's a very driven young man with a great work ethic and he's got a great desire to do the best he can. That's Tiger. It's always been Tiger."

"What am I gonna be next year? And [the doctor] says, 'You're still gonna hurt.'

"He said, 'Well, why in the world would I wait a year to play if I know I'm gonna hurt both years?

"Why don't I just get back and start playing and just suck it up?'

"Which is basically what he did. I thought his performance was quite good.

"I mean, I think he wore out on Saturday and Sunday, but I think it was great to have him back in the game."

Woods opened up his Masters with a 1-under 71 at Augusta National but struggled as the week wore on.

He looked in visible agony but received a standing ovation from the patrons as he finished his final round after shooting 74-78-78.

Woods has committed to The Open at St Andrews but is yet to decide on whether he will play the PGA Championship.

He has, however, filed an entry into the U.S. Open.